Thank you! Thank You Very Much! 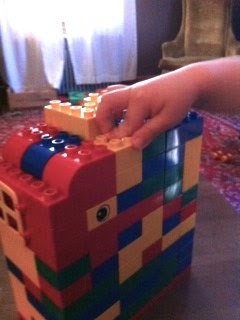 Oh, my what a time we had with a little pull back car tonight after tower building time.  First we built a Duplo tower, then we built a tractor trailer to drive around the tower.  I got to drive the Duplo tractor trailer, and he had a little blue car I'd bought him and brought out with me.  Then he picked up this tiny pull-back car, and we gave it a ride in the my tractor trailer.  After a bit, he took the pull-back car back out of my truck.  He pulled it back, and it came racing toward me on the coffee table, and right onto the floor by my feet.  I looked very startled, which sent him into hysterical giggling!  He dove between the coffee table and the couch and retrieved the car and did it again. This time I caught it just as it went over the edge.  Again hysterical giggles ensued.  This was repeated a number of times accompanied each time by the most delighted and delightful squeals (from him, not me) of uncontrollable laughter.
"Ok, you catch it now," I told him.
He put two hands on the edge of the table, but didn't move them when the car missed where his hands were.  The car went over the edge.  It was still just as funny.  We went back and forth taking turns.  Sometimes pulling back the car wasn't enough to get it to go the length of the table,  I looked surprised or disappointed.  Still funny.
But then a strange thing began to happen.  When the car came his way, and it went onto the floor, he screamed instead of laughed.  He was getting angry.  I think it dawned on him that he wasn't catching it, and now he really wanted to.
I changed the game then.  I gave him a container to hold at the edge of the table.  The car zoomed and plopped right in.  He had caught it!
"Yea! Woo-hoo!" he yelled gleefully.
I clapped.
And then
he said,
"Thank you!"
and bowed.
Where did that come from?