Let Your Fingers Do the Walking

March 20, 2014
It is the 20th day of 31 in the Slice of Life Challenge at Two Writing Teachers where people are linking their stories about their daily life.  There are so many great stories out there, so many wonderful people!  Go visit!  And while you are at it this afternoon and tomorrow, please visit TKT and vote on some great poems!  I just happen to have one there...and I'll never know how you voted - so just enjoy and vote your heart!  If you go in the morning you can read Linda Baie's first round poem there, too!

My snippet is the continuing adventures of babysitting for my grandson!  Let's hope they are never real adventures, just nice calm, happy days and nights for two weeks! 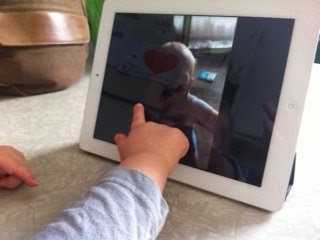 Before supper, Grandson wanted to see pictures I had taken of him.  He knows I have pictures on my iPhone and on the iPad.  I know that he can more comfortably (or I can more comfortably allow him to) handle the iPad, so that's what we used.
I set up the iPad in front of him.  He sat down and basically took over flipping through pictures and playing short video clips I'd taken of him when he was learning to walk.   In the background he could see his mom and BeeTee (grampie) and hear my voice as he played the videos.  He was able to flip through the pictures quickly, skipping any that didn't interest him, pausing for the ones that had the telltale arrow, meaning it was a video.  I watched him try to start a video with his finger but his hand was resting on the screen, too, so it wouldn't start.  I took his hand and tried to help him keep the rest of the knuckles off the screen so it would play.  Pretty soon, when he came to a video he would use his left hand to hold his right hand, index finger extended to help him aim at the arrow!  So cute!
The iPad is so easy for him to use.  He saw a drawing program and seemed to recognize it as he said, "Draw" and opened the program.  He seemed to have no problem with using it... except for when his finger jabbed at adding features that would cost me money!
A few nights ago, while I was cooking supper, he was watching a cute animation with what appeared to be Russian dialogue.  He didn't mind.  The cartoons were short, and at the end he had seen how I just clicked on another video picture on the side of the screen.  It was so easy.  When my back was turned to the sink for a moment, I heard another video starting.  He hadn't needed to ask me to play another one.  He just took over at the helm.  This is too natural.  It shouldn't be natural.  Why is it?