Showing posts from February, 2012
Show all

What I Learned From My Mother

February 28, 2012
I learned from my mother how to grow carrots as big as my little finger and how to scrub the dirt off a carrot with my shirt so I could eat it fresh out of the garden any time I was hungry. I learned it’s okay if you laugh at a funeral because you don’t want to cry. I learned how to type and sew and knit and crochet. And I learned how to iron shirts and tablecloths. I learned that you didn’t want to get your hands near a wringer washer or your fingers too close to a sewing machine needle. I learned not to panic when someone or your dog got hurt, and that you could and should comfort the injured. I learned how to spell and do my homework and go to bed when you were making too many mistakes. I learned that you would do better with a fresh brain, than with a tired one. I learned to make roads in dirt for Tonka trucks and rivers to drain puddles and how to repair broken porcelain horses. I learned how to speak kindly and share even when it wasn’t what you wanted t
13 comments
Read more

Thanks for this Moment 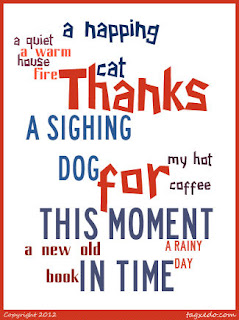 Thank you Diana at One Literacy Coach for my inspiration today...actually yesterday, but I'd already posted.  It was a quiet rainy morning, and I relaxed and had my coffee, my cat, my dog, my book and a quiet house with a nice fire going in the woodstove.  Could a moment in time be better? Maybe with chocolate. But that's for another post. I'm thankful this moment For this daily slice I treasure this minute So cozy and nice. As rain hits the rooftop It patters o'erhead The dog sleeps so soundly; The embers glow red. Its warmth stops the cat He finishes cleaning It's time for a nap For curling, not preening. So I curl up too My coffee mug steaming Reading my book And so close to dreaming I'm thankful this moment For a quiet retreat This moment of time When all feels complete. Be happy I didn't end it this way...like I was tempted... The quiet surrounds Thanks for the moment. Not a creature was stirring Not even a rodent. Th
2 comments
Read more 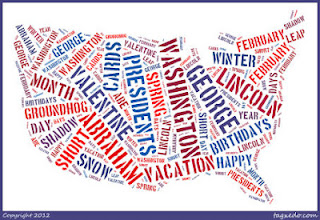 President's Day , was a couple of days ago.  I guess it's officially George Washington's birthday that the nation celebrates on President's Day, but it seemed to me, when I was younger, the birthdays of Washington and Lincoln were combined to make Presidents' Day. In February we celebrate the birthdays of Abraham Lincoln (born February 12) and George Washington (born February 22).   When I was a little girl, we had those two days off, even if they were in the middle of the week. Monday holidays had not been invented yet. Combine two days off in the middle of the week, Valentine's Day, being short by a few days, my brother's birthday and getting to be closer to spring - well, February was quite a wonderful month. Oh, and sometimes it was a day longer, but still shorter than the other months....Leap Year! Which it just so happens to be this year.  Wow, an additional day this year.  Will we be able to handle it? Still... One day it is Grou
1 comment
Read more 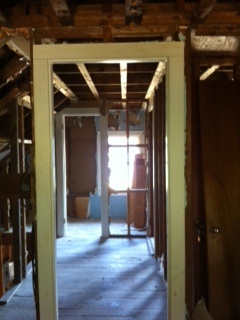 I am on my way up to Gull Haven... It just dawned on me as I was sitting at the computer, that the dumpster is there, and the walls are being dewalled.  The wrinkles are coming off.  We are getting our blank slate this week!  So I'm getting in the car and heading north a ways and see if I can get some pictures for the Gull Haven blog.  Yippee! As soon as I get there, I'll add a photo or two to this page and some to Gull Haven from my phone. Then grocery shopping and maybe some bead shopping just before the groceries.  Wouldn't want ice cream to melt...brb!! ************************* And I am back.  It was a gorgeous February day!  47 degrees and sunny there, although it sprinkled on the way there.  But that's Maine.  There have been times when it is snowing like crazy at our house, and nothing anywhere else...or just the opposite!  Looks funny on the weather map.  Our peninsulas and islands get different weather than a lot of the state. I went in the house
1 comment
Read more 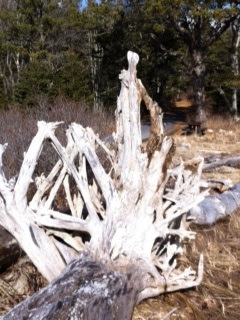 I spent quite a bit of time writing about this picture, only to have it deleted.   I sat down and tried to remember the poem I'd written.   I think I have it all.  I first tried to think of all the rhymes I used and then tried to remember some of the phrasing.  I'm pretty sure I have all but one stanza.  I think there was one more.  But obviously it wasn't important or necessary or I'd remember it, right?  And I've rephrased some of it now, I'm pretty sure.  And this is the way you edit!  No, this is the way you remember to save it as a draft when you are typing it to yourself as an email on your cellphone and stop to check the date. I took this picture while I was out on my "summer day" at the beach in January.  It's my second roots picture and poem.  I'm seeing a trend here.  I like roots.  I'd best get my camera refocused for a little variety, though. Its fingers reach up to the sky - They once caressed the earth ; It floated t
4 comments
Read more 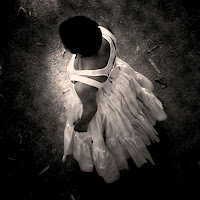 From Every Day Poems on Facebook "Can you find a poem in this photo? If I were to find one, it might be in the woman's stance, or perhaps from an imagined figure in the air above her, or maybe in the folds of that voluminous skirt. Share your poem, or a link to it, right here in this comment box, so we can easily find it and celebrate each other's words..."    So I wrote this: I am still here; I watch from afar, I see your loneliness, I see your scar. It's still alright; You can still laugh, You can still love, Make whole your half. Step out of the dark You'll make your way There's more for your life Than you see today. Did you feel my nudge As I pushed you to go? I want you to live. I want you to grow. Yes, I will be here While you are still there; Step forward knowing I'll always care. Donna Smith 2/8/2012
3 comments
Read more 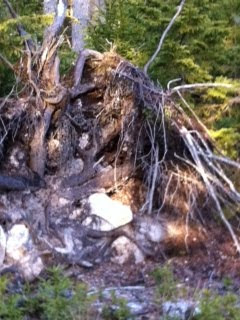 I drove past this beautiful hemlock blown over in one of our coastal storms. Their root systems being as shallow as they are and their full-time foliage makes them prime candidates for tipping over in a brisk wind. Downed Upended Downhearted Uprooted Down trunk Up roots Down branches Up rocks Down shade Up dirt Down nests Up tunnels Down squirrels Up worms Downfallen Uplifted Donna Smith 2/7/2012
4 comments
Read more

February 04, 2012
Waves overcome; The spinning Confuses; Taking to bed Before Sanity Loses. Clarity slips; Tho brain Pursues it; Time slips away Before One can Use it. Is this the second wave of stomach flu that people are getting around here? Others have had it multiple times.  Maybe that's what I'm feeling today.  Make way for my nap... I should know shortly!
2 comments
Read more
More posts