A Full Day By Noon 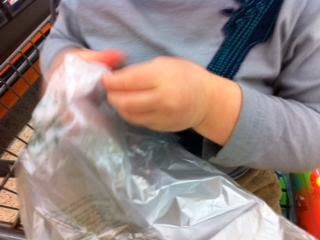 I had a shower...ha-ha-ha-ha-ha-ha (said in a "You can't catch me - nah nah nah nah goo goo" way, or however you put it in your neck of the woods)!
I plotted.  I didn't want to risk waking him, even though it didn't wake him last week when I took a shower during his nap.  I've been here 9 days and that was my second shower.  It's a good thing I'm mostly alone here with a two year old!
Anyway, this morning I woke before he did and waited to hear him start stirring.  When I could hear him up and about (he'll play in his room sometimes for an hour before calling to get dressed and go downstairs to eat) I went to his door and told him I was going to take a shower and then we'd go downstairs.  That was fine with him!  He played, and I got to get clean!
After I finished my shower, we had a lovely breakfast of a banana, an orange, some orange juice, and a peanut butter bagel.  We tidied up, took the dog out and then headed off for WalMart in a nearby town. I got the route in Maps on the phone before we left, so I was really ready.  I had plotted this out, too, for timing and ease of getting there.
We did not get lost on the way to WalMart!  Yea!
I'm notorious for getting turned around, and having to turn around numerous times (although not many people know that because if I'm driving, I'm the only one in the car - oh, great, now more people know.)
We shopped for some household things - got some coloring books and sidewalk chalk.  And then we shopped for food.  Grandson was a great help.
"Tell me when you see the bagels!"
Zoom!  His hand would go out to point to the bagels as we slowly went through the bread aisle.
"Now where ARE those blueberries?  They must be around here somewhere!"
He goes on point again as we swing by the frozen berries.
"Hmmm.  Apples, apples. Where could they be?"
With the apples, bananas and tomatoes, as he discovered them, he opened the plastic bag, I handed him one, and he dropped each item in the bag. (One of the apples did have teeth marks in it, oddly enough.) 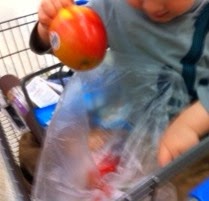 We put our items on the conveyor belt. I gave him some to throw on, but I did the breakables and bruisables.  I hid the coloring books and told the lady at the register I'd like to avoid having him see them.  She discretely rang them up, double bagged them and tied the bag closed... she told me she is Grandma to 8.  She knows what she is doing!
Now, going home I was pretty sure I could find my way back.  Grandson had refused to use the toilet at WalMart.  But what 2 year old would?  It is big, echoy, and the toilets flush automatically and very loudly.  So we "raced" home.  The "race" became a little slower as I got "kind of" lost.  I merely took one turn to the right that should have been to the left, and it took a while for me to figure it out.  I stopped at a closed restaurant next to a cornfield and checked my map.
"Snack?" came the plaintive voice in the back.
At least I was stopped.  At least I'd just been to the grocery store.  At least I'd actually bought some crackers there!  I got out and went back to the trunk and dug out the crackers.  It was lunch time.  I was hungry, too.  I gave myself some snack, too.
Then I exited the restaurant parking lot in the way I'd come.  I found the road the house is on and promptly drove past it for a long ways.  That's what I did the first time I tried to get there on my own, too.  The house is hidden by tall cedar trees.  At least this time I had only driven past it once.  The last time I'd passed it 4 times.
As soon as I recognized the drive, and just as I was going to pull in, I heard, "Go potty?"
"We're home!" I answered.  We'll go right in, and you can go potty."
And he did! Phew!
And then there was afternoon.