I Hear the Train A'Comin'

Today is day 23 of SOLC over at Two Writing Teachers!  We are close, oh, so close to April!

Let's see...Saturday...
It was a gorgeous day yesterday and we went outside twice to play in the driveway area.  The lawn area is too muddy and has lots of branches and leaves that need cleaning up.
The day we went to WalMart, I bought sidewalk chalk.  And today we went outside and drew with chalk again.  I had made a line on the driveway to show him how far away from the road he needed to be, and some lines around cars in the driveway so he'd know I didn't want him to touch them.  The lines became roads to him and he was trotting around on them.  That gave me an idea to draw a line with cross lines on it to be a railroad track...in some places I started to draw the second rail, too, but my back was not enjoying drawing down past my ankles, and the chalk was getting pretty short, so I stopped before all of it was done.  He didn't mind that it wasn't complete, nor that my back hurt.  It all still looked like a train track to him, and I needed to get over the backache and get playing.  There's not much that could be cuter than a tiny human Thomas Train chugging on the tracks and giving loud tooooot, tooooots! 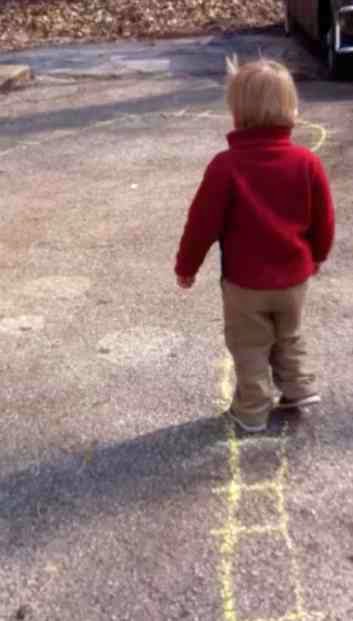 I was going to say "I wish I had a picture, but I forgot and only got some videos".  But then I realized I could take a screen shot in the stopped video.