Day 10/31 in the Slice of Life Challenge at Two Writing Teachers.  Enjoy the reads!

Saturday morning, our new cat (not sure when he will become just plain old "our cat"), Noah decided he wanted to play as soon as we woke up.  He doesn't usually get right into play mode first thing in the morning.  There are pats to be done, leg to be rubbed, meows and words to be exchanged and bowls to be filled, etc.  But this morning, as soon as I opened the bedroom door, he marched straight into the room and headed around the door to the corner where I keep his toy bird-mouse on a springy coily plastic thingy on a pole.  I'm sure there is a shorter name - like cat toy - but then you wouldn't know why it is so much fun for him.
Anyway he went right over to it and wanted it "in play" now!  So even before getting dressed I got the toy out and started letting him run around after it.  He was in a good leaping mood. So I bounced it up in the air, and he leaped and and caught it in his claws, landing with it in his mouth, or shoving it in his mouth soon after landing.  He rolled around on the floor with it and let go of it so I'd know to do it again quickly.

When my husband came out, I handed him the stick and said I wanted to get dressed and start the coffee.  So he took over for a bit.  I could hear Noah's heavy thuds as he leaped and landed.  My husband was telling me what a great jumper Noah was, when suddenly his voice changed tone, a bit more excited, intense, with a tinge of amusement, as he called me to the living room.
"Hey, come see this!"
"Okay."  I'm thinking, "What is there to look at?  They aren't playing any more."

When I got into the room, he was pointing at the floor with the cat toy pole.  I looked down.  There were brown clumps of cardboard that the cat had clawed and bitten off his catnip "recliner".  Okay.  I know.  I have to vacuum them.  I'll get to that later today.  He has made quite a mess.  But that is normal.  Cat hair and corrugated cardboard, I can see that.
Wait.
What's that?
That's not a chunk of brown cardboard.
I looked more closely.  It had little feet.  It had a tail.  It had a long snout, and I couldn't see it's eyes.  It was a baby (it was quite small anyway) mole!  Dead.
My husband picked it up with a paper towel and we looked at it close-up.  Unlike a mouse, its eyes were just tiny low dots.  Its snout was definitely too long for a mouse.  The body was still limp, not stiffened yet.  It had evidently recently been a cat toy.  There were no teeth marks, so I'm assuming Noah just played with it to death.  And upon the early demise of the mole, Noah was still in play mode.  I assume that is why he was so insistent on getting his toy out. 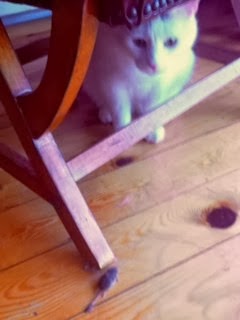 So this morning, I have written:

An Elegiac Limolerick To a Mole Dying Young

There once was a wandering mole
Who strayed way too far from his hole.
He met a white cat,
And that ended that.
“Where’s his family?  I’d like to console.”

I'm sure he was a very fine young mole who died well before his time.  But you just can't come strolling into our house any more.  Our cat doesn't just watch little critters and ask if he can keep it, like our old cat did.  Ha! Why there we go...  I guess the transition to "our cat" just took place!