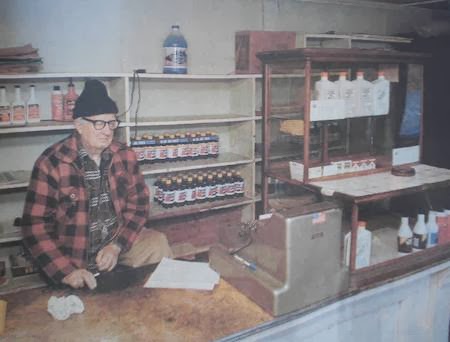 Today I received a neat comment on an old post.  Someone had done a search on "Walter Reed, Woolwich", and my blog post "Walter Reed's Gulf Station", came up.

I'd had another comment on it prior to this one from someone who had lived across the road from this man and his Gulf station.  I had asked the commenter if they were perhaps a daughter of Carla, who was a good friend of mine who lived down the road from me.  I had heard from someone that she got married and lived in the house across from Walter and across from where I had lived as a child, just down the road from her old house.  This person was not Carla's daughter, though.  She gave me more information and her sister emailed me later, too, with a picture.

But on Monday night, lo and behold, Carla's son, who no longer lives in Maine, commented on my post!  He was the one searching for information on Walter Reed.

Unfortunately, I've lost contact with Carla and her family.  We spent summers playing out in the fields behind our houses and in the great big barn she had at her house.  We rode imaginary horses and played school.  I got stung by a bee on top of my head in the old dairy barn!  It was her house I was riding my bike home from when the bats seemed to be (really were!) chasing me (The Feeling of Bats).

I am so thrilled with this contact from the past!  What a neat thing this blogging is!  You never know where it will lead!