H is for Horse 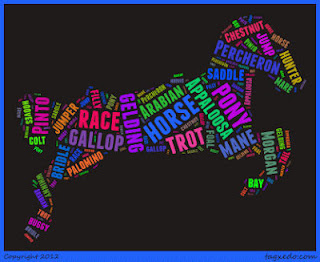 H is for Horse
One of my favorite animals.  I've always loved horses, but had to wait until I was married to actually get a horse of my own.  I think we owned 10 at one time.  They were mostly Arabians, with a couple of Appaloosas and Quarter horse blends mixed in to keep everyone humble.

Tagxedo Theme: Happy Brights
Font: Franchise (okay, I'm fudging a bit - it has an "h" in it!)
Poetry Form: Haiku:
A Haiku is a type of poem with three lines consisting of 5, 7, 5 syllables - 17 syllables in all.  Variations of the number of syllables seems to be fine.  But I'm sticking with the 5-7-5 format.

(Do you recognize this saying that I've rewritten in haiku format?  Hint: It was used to correct your manners when you called out, "Hey!")
Hey! Hay! Hey!

Equines and bovines
Think this is delectable -
Not so for the swine!

"Hay is for horses, better for cows, Pigs don't eat it, 'cause they don't know how."