B is for Bike 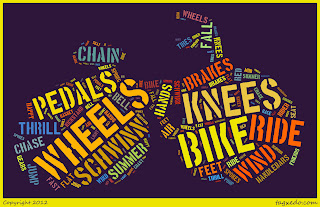 Continuing my kid poems for each letter of the alphabet this month...
I bring you the letter B for Bike.

Tried so hard
to stay upright
the wheels went round
and round.

Tried so hard
to do it right
but landed on
the ground.

Finally
the bike stayed up
the ground stayed put
below.

Rode and rode
that shiny bike
and put on quite
a show.

I wrote this first and then forgot that I'd written it.
I later decided to write a poem in Blank Verse (for B), and came up with this one, that is more from the adult perspective.  The font in the Tagxedo is Boston Traffic.
I'm going to try to keep up the poem form by the same letter and the Tagxedo Font also by the same letter as long as possible.  We'll see.

Oh, bike of mine of blue and white and rust
For childhood’s journey you have been my friend.
We traveled far down road and lane until
You did not fit my seat nor feet again
Then to another one you’d go to be
Their trusted sidekick and good friend indeed
While I continued on at faster speed.

So there you go.  I hope this trend doesn't continue and I have 3 for C and 26 for Z.  That would be quite a challenge.