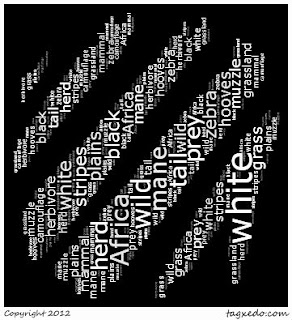 In the A to Z Challenge, we are writing about something to go with each letter of the alphabet, one letter a day through the month of April.  Today we're on the letter Z.  How sad!  We are at the end!  But I'll still be here.
My theme is poetry for ages 4 to 104.  In addition to writing at least one poem, I'm also incorporating a Tagxedo image with a font having the same letter, and the Tagxedo theme beginning with the same letter.  It isn't so easy with these last letters, so sometimes I have to get creative with where the letter is found!
You can check out my other posts listed on the side.  Then head on over to check out those of other writers by clicking on the top tab "A to Z Participants"!

I said at the beginning that as the rate I was going, I might have 26 poems for Z.  Fortunately, I don't!  I do have 5 though.  And that's quite enough for today!
Does anyone have a suggestion as to how I might put these together into a book? I'd like to do that, and maybe add some extras for some of the letters, or just edit it down to just one per letter.  Any ideas on which way is best?  Suggestions?  Encouragements?  H-h-e-l-p?

Oh, but I'll read you also on May 7th, our A to Z reflection day!