D is for Doughnut 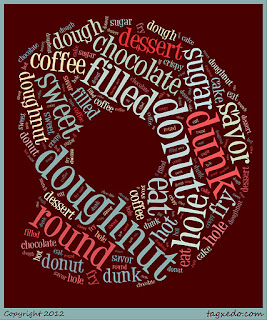 D is for Doughnut

Donut you think doughnuts are great
Sprinkled with sugar and on a blue plate?
I'd eat them for breakfast and eat them for tea
I'll give you one, if there's one left for me!

Goodness, gracious, me, oh, my!
I do not want a piece of pie.
I just want doughnuts piled up high.
Give me doughnuts or I'll cry!

Goodness, gracious, me, oh, sigh!
I ate those doughnuts piled sky high!
I think I'll just crawl off and die -
Next time I'll have that piece of pie!

Dunked in coffee, tea
Or milk,
Usually fried in
Grease or lard; With a
Hole in the middle,
No one could resist one
Unless they'd just eaten
Too much pie!

Have a delicious day!