W is for Whale, Wow and Wubble-you! 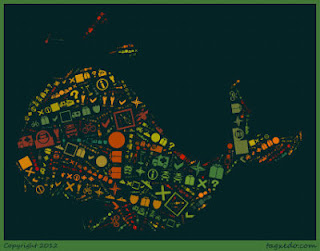 Font: Webdings - Yes, I thought that would be funny!  You can't read what I wrote, can you?  You need a webding translator, hah!  Maybe I didn't even write whale words this time!  How would you know?  Extra points for anyone who can read one and tell me where it is and the color (so I know you didn't just cheat and guess!).
Tagxedo Theme: Wonderful Tirzah
Poem Form: Waka - or Tanka ("short poem") is a type of classical Japanese poetry, earlier known as waka ("Japanese poem").  It consist of five units usually with the following pattern:
5-7-5-7-7. Traditionally it has no rhyme.

Waka for a Whale

In the A to Z Challenge, we are writing about something to go with each letter of the alphabet, one letter a day through the month of April.  Today we're on the letter W.
My theme is poetry for ages 4 to 104.  In addition to writing at least one poem, I'm also incorporating a Tagxedo image with a font having the same letter, and the Tagxedo theme beginning with the same letter.  It isn't so easy with these last letters, so sometimes I have to get creative with where the letter is found!
We are close to the end now!  But you can check out my other posts listed on the side.  Then head on over to check out those of other writers by clicking on the top tab "A to Z Participants"!

An Acrostic for Wow

Wow!
Three letters to go
Only X, Y and Z!
Though the letter flow
Will soon come to a stop,
I'm not feeling low
My poetry's blooming
And starting to grow.
I'm forever able
In wonder to crow
I've finished the race of
Thirty days ago.
Can you see my face
beginning to glow?
Wow!


WWWWWWWWWWWWWWWWWWWWWWW
An informational aside for teachers of the young - as a first grade teacher, when I came to the letter W, I would sometimes call it "wubble -you" and sometimes "double v" (pronounced as the French letter).  The former, I would use when we wanted the sound for w, as in many cases they would say /d/ as in "double" as the sound made by W.  They, of course, would laugh and protest my incorrect name for W, but would forever remember the sound for W.  "Oh, yeah, wubble-you!"
And when we were writing it, I would use "double v". They would protest and correct me again.  But I would point out that it really looked more like a double v to me than a double u! It was fun, and they remembered those funny ways of learning W's sound and appearance.  Besides, I just like antagonizing them to be silly, as I protested just as loudly to them, that the way they wanted it to be said or written just didn't make sense to me either!
Isn't Wubble-you a fun letter!