These are the poets that contributed a line each to Irene Latham's brainchild, the Progressive Poem.  This year's poem was begun by Matt Forrest Esenwine, with a great idea: using found lyrics from songs.  Each day a new poet added a new "found" line from a song...right up until today.  Today is the last day, and it is my turn to supply a line.
I have written a rather lengthy explanation of what went on in my head and on paper.  You can, of course, read it, or skip down to the ending...well, not the ENDING... save that.  Go to the middle where the poem is, to read the last line.  Then go to the END if you are in the mood for - um - a laugh?  more music? something different?
April 2019 Progressive Poem Contributors and their lines:


23 Penny @apenny and her jots

And here's the link to the playlist that was created with the songs from which the lyrics came.

Spotify Link to the music list.
OH, MY WORD!

First, let me say, this has been a long month, what with the AtoZ Challenge (if you are here for Z - go HERE) and National Poetry Month with a poem a day and all!  And then following along with the Progressive Poem. I've watched and read with trepidation, wondering what line I could "find" in music to wrap up this poem into a conclusion that matched its summery, "dare to be" song medley.  I was coming up with nothing for the first week.  But that is expected.  You have no idea where it will go.  The best I could hope for was a happy coincidence that one of the lines or songs I was thinking of would actually work by the time the 29th writer had finished.  So I waited.  At first I didn't read it every day.  I waited for two or three days, so I wouldn't be tempted to get ahead of myself in planning.

BUT THEN... one day it occurred to me that I could maybe make a found poem with what was there.  And thus began my journey in earnest... and at last I could start doing more than just reading and waiting.  It was scary to do that and realize that suddenly I'd have to come up with a finale to contribute in 24 hours.

OH, MY...no, I won't say it again.  But I got this idea that made me so excited to get started, and I could start now... I would not go looking for a song, but do the ultimate in the "found" category, by using the "found" words in the created poem, to create a "found" last line!

I wrote the lines and took words in order, anxiously awaiting each day's offering.  To spread out the "found words" that had been supplied, I decided to try to write a line 8-12 words long, with at least 2 words in each section - dividing the poem up into 10 lines each (except 9 on the last, as mine would be the 10th of that section).

And then suddenly another inspiration hit somewhere around April 15.

What would it be like if I took the poem in reverse - total reverse, not just lines but first word last?  It would help me to be free of phrases in songs and see the individual words.  It might end up feeling more like a summing up or a back to the beginning of the poem at the end - a cyclical kind of thing?  Or maybe it would be just something altogether different?

At any rate, I decided to try it.

I took what I had and wrote each line backwards, adding them in reverse order - most recently written at the beginning.  I kind of liked the feeling of liberation.  So I continued writing each line in reverse order, starting with the first line, first word at the end.

I kept my division of the poem into thirds to divide up the lines to give me some "spread" over the whole poem. And from these words I selected the last line of the Progressive Poem.  It is a compilation of the song words.

The one thing that I found out about this process was that it became more and more exciting to see what words I would have available to use in the final line of the poem.  I watched and wrote backwards every day from that moment on, trying out different lines - or parts of lines.  I could not finish until the last line was offered!

Here are the lines backwards - and the underlined words are the selected last line:

*PUT LINES 11-20 HERE
go to years light than now closer we’re old minute one than less know to easy not it’s deep the diving waves the waltzing me with come you won’t oh veins my in tiger a there’s and sea the to eagle an like fly wanna I sky the o’ piece a me get gonna today called it’s here tomorrow’s eyes my in sun the got sky the in cloud a not
"We’re diving in! Gonna"

*PUT first 10 LINES BACKWARDS HERE
down shining is sun the walk a take we’ll come go let’s set ready forever last it make lifetime a of chance the it’s blue dazzling greens Kodachrome today of portrait a on opens curtain the window your from lean rise to only had you day every and each sea laughin’ the swim we play to time just school for time no smiles world whole the and fun miles for see can I summer endless
"take a chance on summer!"


And now for the last line ...
Drum roll....
Um, and I've set it to music with a refrain.  Me and my ukulele...lol!  I'm a beginner remember, so nothing fancy.  But I'll send you the lyric with chords if you like.  The music is at the end.

******
1 Endless summer; I can see for miles…
2 Fun, fun, fun – and the whole world smiles
3 No time for school- just time to play
4 we swim the laughin’ sea each and every day
5 You had only to rise, lean from your window,
6 the curtain opens on a portrait of today:
7 Kodachrome greens, dazzling blue
8 it's the chance of a lifetime
9 make it last forever–ready? Set? Let’s Go
10 Come, we’ll take a walk, the sun is shining down
11 Not a cloud in the sky, got the sun in my eyes
12 Tomorrow’s here. It’s called today.
13 Gonna get me a piece o' the sky.
14 I wanna fly like an eagle, to the sea
15 and there's a tiger in my veins
16 Oh, won't you come with me waltzing the waves, diving the deep?
17 It's not easy to know
18 less than one minute old
19 we’re closer now than light years to go
20 To the land where the honey runs
21 …we can be anyone we want to be
22 There’s no stopping curiosity
23 What’s so amazing that keeps us stargazing?
24 Looking for a sign of life
25 You're simply the best
26 Hold my hand and we'll be free
27 Have faith in you and the things you do
28 Multiply life by the power of two.
29 Let's sway under the moonlight, this serious moonlight,
30 And free we'll be - we're diving in! Gonna take a chance on summer! 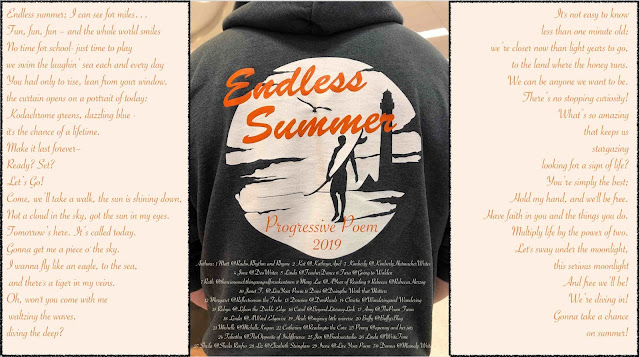 I found this guy in Target at the Starbucks there wearing this hoodie on Sunday afternoon.  I had to ask him if I could take a picture of his back... not too strange a request, right?  So I put the poem on it.  It enlarges to be more readable.

And now the finale - just because I "could"...well, not because I could really, but because I wanted to try and SEE if I could do it....I got my ukulele this month and am teaching myself, so I can maybe teach the basics to my granddaughter.
I set the poem to music (of sorts).  So, here I am playing my ukulele - my debut performance, lol! - I wrote the lines in order in the song, but used the first two lines for the chorus, then figured out chords, practiced and FINALLY played and sang ... right here: 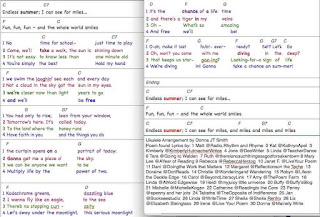 How about a found one using just the TITLES of the songs?