March 30, 2016
It is already Day 30 of the Slice of Life Challenge at Two Writing Teachers - only ONE DAY left to go!
What to do? What to do? Keep writing!  You are almost to the finish line!
Or are you?  Don't you think you should just keep writing for writing's sake?  Aren't you wondering what good stuff you still have in you?  Don't you remember that thing that happened that you didn't have enough days to tell about?  I know I still have pictures that I'd taken to use in case I needed a prompt for the day, that I haven't written about yet.  Two Writing Teachers still links each Tuesday to Slices, so you can still keep up the writing at least weekly. 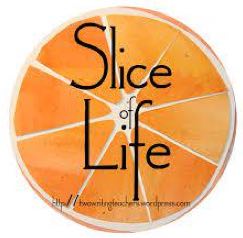 Or, here's another "think to think", alongside Tuesday's Slice of Life and/or the A-to-Z Challenge, that I mentioned yesterday...

Adrienne Gillespie, at Books and Bassetts mentioned, in the comments yesterday, another April writing challenge - that of writing a poem a day for NaPoWriMo!  And I've signed up here to have my blog listed.  You don't have to have the blog listed, and you don't even need a website.  You don't need to post your poem.  You just need to write a poem a day in April.

Just another "think to think" in case you are feeling panicky about having time on your hands after March!

But, back to the Slice, because it ain't over yet.  I am thinking of things I want to do.  One is to go see my grandchildren or have them come up here.  They are so far away, but not so far that they can't drive up or vice versa.  I need to try out my new lap top for reading books to them!  I have a lap now.  They've always had to sit beside me really.  But after losing 28 pounds... well, that's a whole child that was already sitting on my lap before they came...so there's room for a real grandchild here now!

Will accomodate
Multiple users with books;
Cost: One Nannie hug.

*Donna JT Smith has just made up a new poetry form, the Quatro-Haiku.  See below for the definition of this new poetic form.  If someone else has done this before, and named it something else...well, I'm sorry.  I've just renamed it and claimed it!  It's a lot like discovering "new land" that someone else owns.  Oh, well, too bad.

Quatro-Haiku: a very strict poetic form based on the Haiku.  It is made up of four stanzas or Haiku.  Each Haiku or stanza must strictly follow the correct 5-7-5 syllables per line format.
Any deviation in format will disqualify the poem and place it in the Quasi-Quatro-Haiku category, which will in future, I'm sure, be fondly referred to as the "Crazy-Quatro-Haiku".  So stick to the format, as these titles get a bit wordy and have already used more than their fair share of vowels.  (Late addition: My daughter, Little Tinkerbell, has suggested that any formating changes should be referred to as "Cwazy-Quatro-Haiku", and I am inclined to agree.)

New discovery!  I have been to read "Falconers" post this morning and there you will find a "Cinco Haiku" or a "Quatro-and-a-Quarter Haiku" (as I've named them)!  Great syllablificating on these BTW!

(Note: Tawny Scrawny Lion refers to my son.  It's a book he used to love for me to read.  Little Tinkerbell, is reference to my daughter who was pixie-small.  Both got to use my lap long ago.  It has gone pretty much unused since then.)