March 05, 2017
This is a Slice of Life...Join other Slicers at Two Writing Teachers this month! 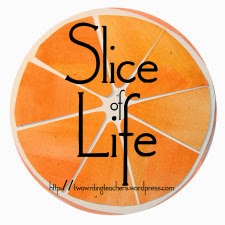 Yes.  It was a moose who had made the Jello.  He was sure of it now.  How else could the Jello have gotten there when Nannie wasn't even home?! (See yesterday's post if you are confused!)

So then I had an idea to further cement the deal.  I went looking for Pickles.

Pickles is a floppy green moose that I have had for a number of years.  I used to send three moose around the world in a grand exchange with schools in other countries: Peru, Uzbekistan, England, France, Australia, Japan, Germany, Canada, South Africa, Argentina.  Because our moose were gone for the whole school year, I decided I'd keep a moose in the classroom to visit with the animals those countries sent to visit us - and to remind us of our moose far away!

Pickles lives at my house now.  My grandkids had SEEN him, but he doesn't PLAY with them - they have plenty of other stuffed animals at my house, so I keep him special.  I think it is a good thing to have something special that the kids know they don't play with.  And since they have PLENTY of toys here, I don't feel like I've deprived them of fun!!

So, yes, Pickles lives here.  Mostly hanging on the back of a chair in the bedroom, and sometimes plopped on a pillow.  The dog would really like to play with him to death, so he doesn't come out into the living room much unless accompanied by an adult he trusts.

I went into the bedroom while the kids were playing in the living room, and I grabbed Pickles from the back of the chair where he was trying to look busy and somewhat pensive at the same time.  Though what was running through his mind, I'll never know.  Counting knots on the pine walls perhaps?  Pretending he's in a pine forest?

I brought him out to the kitchen and set him on the countertop, and propped him up on a box of Jello.  Being a lazy, sleepy sort most of the day, he needed that Jello box in order to look lively.

Then I went to the table and sat down to wait as I talked with my daughter and my husband.  Pretty soon the inevitable happened.  The grandson came into the room.  He sees everything always.  And of course, his eyes went to the countertop and the moose. 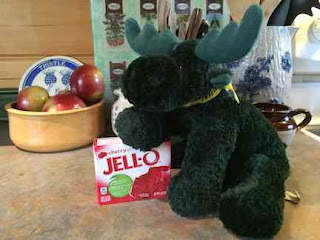 "Hey! What's that?"
"What?"
"That!" He pointed.  "What's that moose doing there?"
"Oh, it's Pickles! I don't know!" I said, looking confused.  "Hey, it looks like he is getting ready to make...Jello!" I continued in an excited, whisper.
"But he isn't moving!"
"I don't think he wants us to know," I whispered again.  "Maybe we should ignore him and see what happens."

And with that, my grandson left the kitchen and rejoined his sister in the living room to play, argue, pat the cat, etc.

A little time went by and when the two grandchildren were fully engaged in playing,  I prepared the Jello quickly and quietly.  Then I put all the glass bowls of Jello in the refrigerator, leaving the packaging on the countertop right in front of Pickles.

I sat down and resumed talking.  My husband went over to the counter and picked up the Jello box and paper container...(What? He never cleans up in the kitchen.)
"No, no, I need those there!" I quietly told him before they hit the trash can.  He returned the trash to the countertop beside the sneaky moose.

And of course, shortly, the grandson came into the kitchen again.  He looked at the moose, he saw the empty box! 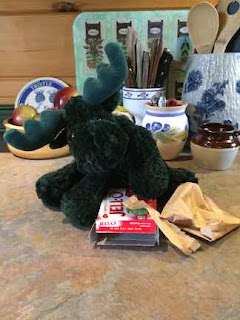 Grandson fairly flung the door open to look inside...and yes, there it was!  Jello!  His sister ran to see.  Giggly screams ensued. 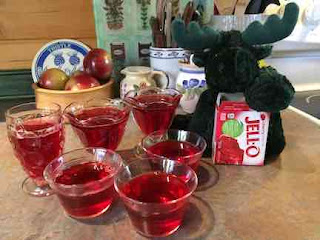 And we all had Jello for dessert...some of us had two.

Tomorrow... who IS that with Pickles?


My poem for today: