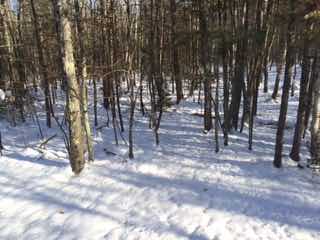 This morning, I watched a nice fluffy gray squirrel make his way through the woods.  In summer you can't see them well because of all the foliage.  But in winter the sun shines through the trees, making long shadows earlier in the day than I think appropriate.
I watched him scampering over the snow mounds and through the shadows, to the small stream.  He stopped to get a drink and then burrowed down through the snow to the buried oak leaves.  He fetched an acorn or some other small bit that he sat and nibbled on for a while before moving on.
He was my haiku today.

Yesterday I saw a big gray squirrel who was thinking about crossing the road just as I was approaching.  He changed his mind, but then he appeared to lose his mind - as squirrels are wont to do.  He didn't run back in the road as they sometimes will do when changing their mind, but he did start scampering back and forth in the snow on the side of the road for a while before finally deciding to high-tail it back to the woods.  I just wonder sometimes what they are thinking.  I hate when they change their minds at the last minute, and I can't adapt to their last minute decision.

Squirrel crossing here
Prepare for indecision
Mistakes will be made