March 14, 2017
Yesterday we made an unexpected trip to NY and back, and tried to beat the storm home!
We did it!  Here's our weather map and our dot... we arrived here at 4:35 am a mere 24 hours after I first woke up yesterday morning! 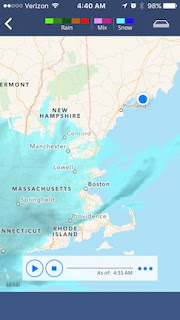 We weren't sure if we were going until 3 pm yesterday.  If we did, we would have to hurry!  The storm was slated to start in NY at 6 am today, and at 9 am for us in Maine.  We made only one stop each way.  Ok, maybe it was two each way.  Short stops.

The trip was quiet.  Not too much traffic on the road even though nothing had started.  Lots of salt trucks out preparing the roads for the storm.  There were signs flashing of the coming storm.  New York warned of the snow storm and said to "Avoid Travel".  Massachusetts said "Snow storm." and banned "tandem trucks and special permit vehicles" from the highways.  And Maine simply said "Winter Weather expected. Plan ahead."

My daughter in PA texted me as we were entering NY and said they had just started a few flakes falling.  Would we make it back before hitting snow somewhere?  We ate a quick burger and left to head back home.  We saw no signs of snow.  Some semi's were still on the roads trying to get where they really wanted to spend the day, and very few cars.  We kept on going, and still no signs of snow, except that the sky was a cloudy bright from the moon shining behind clouds now.

As we got closer to home, I checked the weather map.  Yipes!  I'd been breathing easy because they'd said the storm wouldn't start until 9 am by us.  But already the storm was closing in on us.  Everywhere we'd just been in the past hour was showing snow happening.

We were tired but relieved when we pulled into our snowless driveway.   I took the dog out for a run and a fetch the ball...
then I came in to blog...
I have unwound.
It is 6:40 am.
And I am now
going
to
bed.

Winter weather is about to be had
Some will be happy, some will be sad
And others will be decidedly mad
But as for me, I'm going to be glad...

For March is the month when
the snow flies
and dies
March is the month
when spring
comes alive
March marches over
the snow
in a hurry
And mice that were tunneling
rapidly
scurry
For places that won't melt
in strong
springy sun
Though this will be deep snow
when all's said
and done
I think it will melt
in about
a fortnight
If we just endure
this bit of
the white
Soon we'll be thinking
of daisies and
'dillies
And getting the bestest
of springtiming
sillies.