U is for Underdog


Well, U is for unable to get my own pictures.  I finally found a picture online of one Maine lobster boat that begins with U - Underdog!  I have to credit Sam Murfitt for the picture here.

I also have a video clip of showing Underdog getting rolled a bit in a lobster boat race in 2008.  The write up is here:
http://www.fishermensvoice.com/archives/0909foolishpleasureunderdog.html
The video is here:
http://www.fishermensvoice.com/archives/0909quicktimevideo.html
It all turns out well in the end, after a concussion and a broken arm, anyway.

Here is Underdog and two poems I wrote for it: 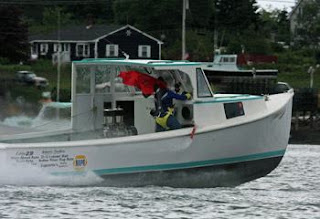 The battleship USS Alabama may be seen on either of these two pages -
http://harmonyclubwaltz.blogspot.com/2007/01/his-birthday.html


Ooooh, and I JUST found this other boat!  Uncles UFO!  Two U's!
I don't have a poem for it, because I JUST found it.  But here is a You Tube video of Uncle UFO racing Whistlin' Dixie in 2009.  This video is taken aboard the lobster boat Uncles UFO.  It's pretty cool to watch and not too long.