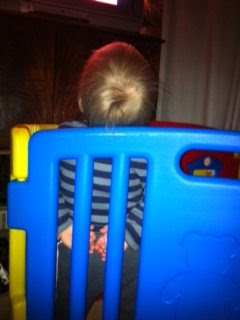 I went to see my daughter and care for her last week after she had her 4 wisdom teeth surgically removed.  We had all been concerned about the possibility of nerve damage in her face and neck, as the first dental surgeon had said that a nerve was very close and possibly intertwined around a tooth.  The second opinion was different, but still a bit of a concern.  The surgery went smoothly and quickly.  There was no nerve damage at all!  She couldn't pick up her son and couldn't carry him around for the week I was there though.  Throbbing and the risk of losing a clot kept her lying pretty low for a few days.

I stayed a week and learned more about my grandson while I was there.  He is quite a kid now.  A toddler of 18 months.  A big deal.  A walker.  A giggler.  A watcher of everything.  A mimicker of every sound he hears...and he hears everything.  I wonder at parents and others who can speak crudely and rudely around young ones, saying that they are too young to understand and they aren't listening and it's going right over their heads.  Nope.  No, it isn't.

But that is for another day.

On the day I want to talk about, we needed a break from blocks, books, trucks, etc.  and decided he could watch tv - Netflicks - Mr. Rogers to be exact.  So she asked him, "Do you want to watch tv?" (Now, mind you she doesn't do this often and there are only 3 or 4 shows he watches ever.  She doesn't even watch tv while he is awake.)  Anyway, he said yash...which is yes, of course.  And then he said, "Chooch."  I asked her what chooch meant and she shrugged her shoulders.  So she turned on Mr. Rogers.  He looked at Mr. Rogers coming through the door, changing into his sweater, and began to cry.  He likes Mr. Rogers.  Why was he crying?  He stopped crying when trolley came in.  Then he started to cry again.  Now what?  He watched again for a few seconds pointed to the tv and again cried, and said "No, no".
I told my daughter that I didn't think he wanted to watch Mr. Rogers for some reason.  At which point her face lit up in a look of understanding!  Chooch was for choo-choo train!  He wanted to watch Thomas!
She quickly changed over to Thomas the Train.  He looked up at the tv and stood with his hands behind his back as the train came on the tv screen.  And then... he turned to look at his mom, and he blew her a kiss!
He doesn't say many words yet, but the ones he does say mean something.  We have to be careful they don't go right over our heads!