April 23, 2014
My theme: Book Titles A to Z written by Maine authors,
and a poem for that title each day for the month of April.
The poem is not about the book, but is written with the title as inspiration! 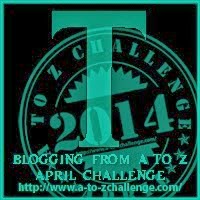 T is for:
Touch Blue

"I will touch blue,"
She says, and grasps her crayon
to furiously color the sky
leaving white spaces as clouds.

"I will touch blue,"
She declares, sweeping her brush
across the page to paint the waves
crashing against the rocks.

"I will touch blue!"
She shouts, picking berries
and tossing them into her pail,
bending low by the stone wall.

"Touching blue,"
She whispers, closing her eyes,
while indigo berries,
cerulean seas,
and cobalt skies
drift and sift through
her dreams;
and she reaches
to gather
forget-me-nots.


I just added this one below at 9 am.  I just keep revising the poem.  I now have put this one up, too.  What do you think?  Maybe I should keep working on it again some day later?
Touch Blue

"I will color a blue sky,"
She says, grasping her crayon
spreading the blue
leaving white clouds.

"I will paint blue waves,"
She declares, sweeping her brush
across the page
to crash against rocks.

"I will eat blueberries!"
She shouts, kneeling at the stone wall
filling her bucket to the brim
for baking a pie.

“I will listen to the blue jays,”
She crows, calling to them
for the sheer pleasure
of their company.

"I will touch blue,"
She whispers, closing her eyes,
while royal blue jays,
indigo berries,
cerulean seas,
and cobalt skies
drift and sift through
her dreams;
and she gathers the
forget-me-nots.
©Donna JT Smith

I have used Cynthia Lord's book "Rules" for my R post on Monday.  Check out the links below for lots of great information about this author and her books.
The state of Maine plans to shut down her island's schoolhouse. The islanders plan to increase the numbers of students by having several families take in foster children.  Tess' family is taking in a 13 year old boy.

I featured Dahlov Ipcar my first post of the A-to-Z Challenge with her book Animal Hide and Seek, and then on the third day I had another poem for The Cat at Night.  Please check back there for more information on this wonderful Maine writer and artist, who is practically a neighbor of mine...and I should let her know I have her books featured here...what was I thinking?
A recent interview with Dahlov Ipcar
Maine Mag recent interview with Dahlov Ipcar
This blog post was brought to you by the letter T!

Terrific!  Tom Terrific!
(You do remember Tom, don't you?)