Have a Slice of Ice?

March 01, 2015
It's the beginning of the March Slice of Life Challenge - The challenge is to write a snippet of life each day for the whole month, post your link to Two Writing Teachers and read other Slicers' offerings each day.  I have been doing this challenge each March for the past four years  - year Number Five starts today!

I've been waiting for March 1, so I could say this:


Have a Slice of Ice?


February's over
March is BEGUN.
Let's hear laughter,
Let's have FUN!
Days are longer.
With more SUN.
Ice will melt...
Duck and RUN!

On Wednesday last week I was outside, and the sun was shining brightly; and though it was still very cold out, the icicles on our house were dripping and looking a little melty around the edges.  We have had literally "killer icicles" on our eaves this year.  Mostly we watch them grow for a bit and then knock them off.
However, one icicle started forming on the surface of the house under the porch roof.  Water was seeping down between the edge of the roof and the house right beside a window.  I'm surprised, but I don't think I took a picture of it on the house.
At any rate, this icicle was growing daily and there was no way to get it off without doing some damage to the side of the house.  So we left it.  Until Wednesday came along with a bit o' sun.  I had to take the puppy out, and on my way back in I looked at the icicle.   It looked like it might be working itself loose a little.  I put my fingers under the edges, first one side of the 10 inch span, then the other.  I could get my fingers under it a little farther than I'd been able to, but it still wasn't budging.  Fine.  Leave it there.
But then I noticed that the ice at the bottom kind of went off the edge of the porch over some of the stacked wood I'd put there the night before one of our blizzards in case we lost power.  I decided to chip it off the wood and maybe it would even help it drip and drain away.  As I shoveled and scraped it a bit, I was bent over beside the icicle. Out of the corner of my eye, I saw movement and realized in an instant what was happening.  The 8 foot long icicle was dislodging and falling directly toward me!
I put up my hand to deflect the huge column of ice and scooted backward just in time to mostly miss it.  As I pushed on the falling chunk of ice, it broke above my head.  I must have deflected it upwards, because it made another attempt at me. So I raised my other hand (the one with the shovel in it) and clunked myself on the head with the shovel handle for good measure, as I tried to protect my head yet again from that stubborn chunk of ice. 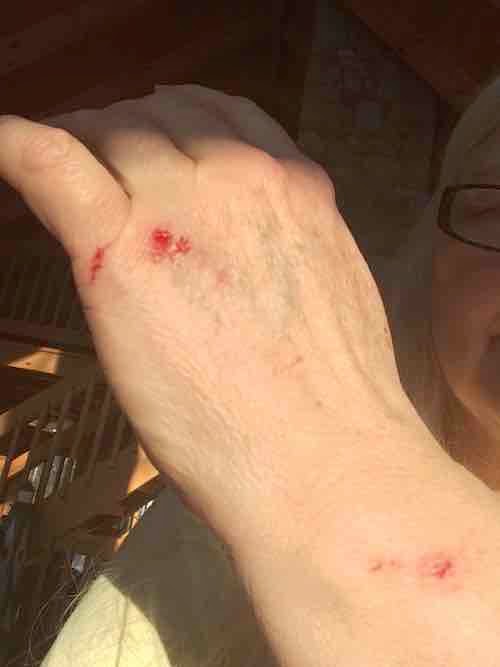 My hand was scraped up pretty nicely, and I had a sore head, but the ice missed knocking me out... or worse.  I looked at the ice on the porch, now broken into foot-long pieces about 10-12 inches wide and 2 to 3 inches deep.  I went into the house and put cold, cold water on my throbbing, stinging hand and wrist, ignoring my head because it wasn't bleeding and didn't hurt more than my hand yet, and then got the scales to take outside onto the porch.  Each broken piece weighed 10 or more pounds.  I figure there was a good 30 pound portion that had aimed at my head as I had bent over in front of it scraping the porch.
My hand is still a little sore, my head has a bruise on the top, and I'm a little more wary of icicles.  But all in all I'm here to write a happy ending to a Slice of Ice!