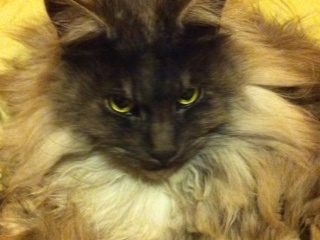 Well, Friday didn't turn out to be a regular day.  Actually the whole week got messed up right from the beginning.  I was sick, and then my Maine Coon cat, Purrsee, got sick.  I recovered; he did not.  In spite of a number of calls and multiple visits to the vet, giving fluids, doing exploratory surgery, and receiving antibiotics and painkillers, Purrsee had to be put down Friday morning at 8:30.  I am so sad; I thought we could help him.  I don't know what happened and neither do the veterinarians.  He just suddenly stopped eating and moving around.  He stopped closing his eyes to sleep.  He was in pain and nothing could be done for him.  He was our friend for the past 10 years.  He was a quite a character.  I truly miss him.


I thought I’d take time to write of my cat,
The one who so recently by my side sat,
He gazed out the window and looked so content;
For ten years he was here, and then he just went.
He wasn’t the easiest cat to befriend,
But he loved us well, right up to the end.
He opened the cupboards when he wanted food.
If you didn’t do it, he’d get downright rude;
Yelling and slamming the doors till he got
Food and some water - Pronto! On the dot!
It had to be fresh, no food that was stale -
Grading morsels and mortals alike: pass or FAIL.
His best friend, the dog, was his loyal sidekick,
Sharing her bed, her fire and her stick.
One time as a kitten he latched onto dog's lip,
And held on steadfastly till we ended his trip.
He often would watch me as I sat to write
Peer over computer until late at night.
And given a chance to tap on the keys
I'd find he had written a whole lot of e's.
I’ll miss all the glares that turned into purrs,
The long silky locks and the gray, tangly furs,
One renegade whisker, the big tufted paws,
The twitchy tailed warning of razor sharp claws.
I’ll miss you, my cat, for though you were rough,
And your independence translated as tough,
You melted my heart succumbing to purring
Tail curled over nose, cozy and alluring.
If cats go to heaven, I hope you’ll be there.
But a cat's true repentance is really so rare.

Here are some other posts where you will hear of Purrsee:
Dog and Cat
Reigning Cat and Dog
Goldie Locks and the Cat Hairs
Purrsee
My Winter Window
Static Cat