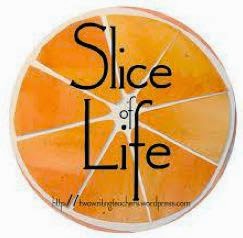 Two Writing Teachers is hosting the Slice of Life Challenge for the month of March.  Visit some of the wonderful blogs that are linked to their page.  Click the orange slice to get there or on the blog title.
If you are looking for today's poem with Perch - it's at the end of my post.

Today, I did what I said I was going to do - what I've wanted to try for quite a while.
I went to the public library and hung out in the children's area for 2 hours reading and thinking about books.  I should have done this a long time ago.  I read mostly early readers, though one book I read was a biography of Peter Mark Roget, "The Right Word".  You know, the guy who wrote the Thesaurus...which means "treasure" in Latin and Greek.  Did you know that?  I didn't.  I never even thought it had another meaning besides being its own meaning of a book that has a lot of words you can use for other words to mean the same thing.  He started making lists of words at an early age and continued for his whole life. 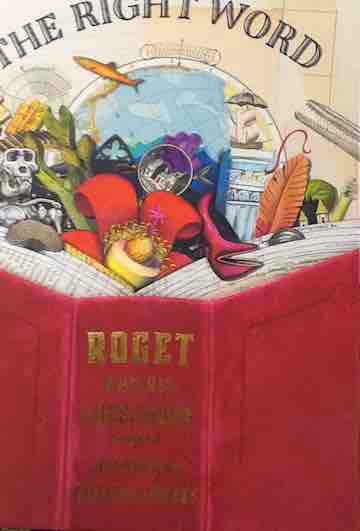 A few books after that one, I read a "Fancy Nancy" book which I'd never read before.  Neat thing.  In her books she's always using a "fancy word" and then defining it for you in the context of the story.  Kind of a neat pairing of books to read in your class if you wanted to start expanding vocabulary in reading and writing, and making them aware of how they could use "fancy Nancy" words in place of some plainer words. 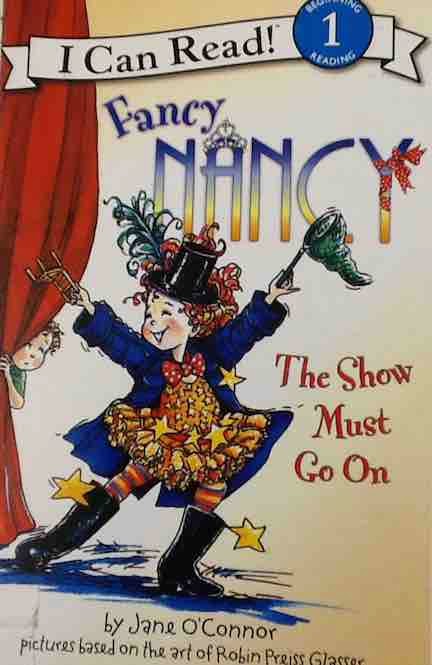 I must say that the children's room has changed since I was a kid.  There was a craft activity going on in a room beside the book room.  There were home schoolers and an after school group from the public school using the space. Some were building train tracks, some were in a little rowboat, some played with a dollhouse, a few were on computers with headsets, some were at tables playing board games, and others were in Winnie the Pooh's treehouse or sitting in easy chairs, as I was, reading.  It was a busy place after school.

I enjoyed the background noise of the activities as I read.  Maybe I wouldn't if I were reading something above a second grade reading level and had to concentrate.  But I wasn't, and I didn't have to.  So it was enough fun that I think I will do this again, anticipating that it will also help me in my own writing.

Just one more tiny little thing that seems worth mentioning.
As I walked into the library there was a poster on the door and flyers on the desk to take... Poetry Open Mic... read your own poetry or a poem you like by some other poet.
The woman at the desk said they'd done this before, and it was very successful.  She said there were all ages.

I'm thinking about it.  It's just a little town thing.  Well, a bigger-town-than-I-live-in thing.  It's actually a small city: the small city in which I taught.  I don't know.  I have never stood up in front of people and read my poetry.  I have this feeling I should do it.  Just do it.  Maybe it would be a good thing to just go and listen to for the first time, and then decide if I have anything to contribute.  Or maybe I just do it and hope there's no one there I know.  I could wear a disguise.
What would I read...if I were to do it? 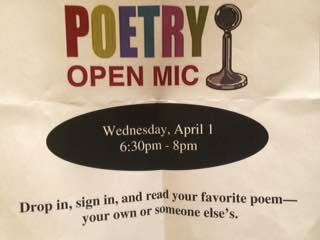 Heidi Mordhorst's word at My Juicy Little Universe today is PERCH.  It seemed fitting for a flitting bird that is commonly seen here.  They seem especially busy and talkative right now out there in the extra sunshine and melty snow! 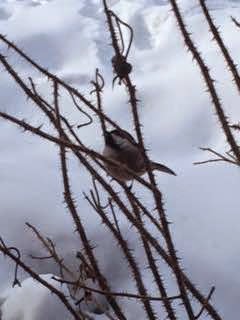 The Maine State bird is the Black-capped Chickadee.  It's a cute little ADHD bird that doesn't feel the need to leave the state in winter.  It bops around from tree to shrub and looks for left over berries and rose hips.  As spring arrives, the robins have first dibs on the early morning songs.  After that, the chickadees take over for a while.  If you've never noticed that all birds don't sing at the same time, listen some day.  See who has the first round of calls, and as they die down, who is next.  They have a pattern they follow...there are rules to being a bird. There are very few "Share the Skies" signs.

From his perch in the birch
The chickadee sings
In winters or summers,
But best of all springs.

When the robins are done
It's chickadee time
With back and forth banter
Their voices will chime.

"I'll hop over there then."
"I'll wait in this tree."
"I'll come and find you, My
Little Chickadee!"

Their chirping gets closer,
"Fee-bee, chick-a-dee";
One birch perch at a time,
"Chick-a-dee-see-mee!"