Drama in the Woods 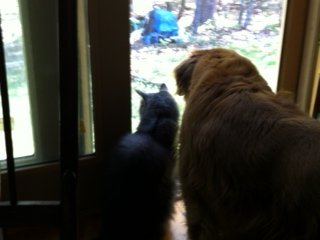 I was working around the kitchen when I heard the little notification that my daughter was online and chatting with me.  So I went over to the computer on the kitchen table - well, one of the kitchen tables - the cat and computer table - and started chatting back.  I face the sliding glass doors to nowhere - twelve years and no deck yet - when I sit at my computer, so I can watch the backyard where turkeys and deer meander through occasionally.  My husband has been keeping up with a bird feeder out there that two red squirrels have taken a liking to, along with some gorgeous blue jays, some chickadees and a variety of other seed-eaters.  From time to time there is a ruckus as both squirrels arrive at the same time.  I've watched them stare each other down - one one the seed brick and the other on a nearby branch.  No one gets to eat then.


Finally, I will see one chase the other up and down and around tree trunks until someone gets too tired and leaves.  I never know if it's the one doing the chasing or the chasee that gets tired...they look alike and it's a bit like a NASCAR race to me as to whom is ahead of whom.  I mean, when you are going around and around a tree trunk, how do you know who's being chased?
Anyway, as I was chatting...you know, with my daughter...I told you that.  I'm hearing all sorts of commotion in the woods outside.  Scampering, leaves and brush moving, squirrel barking.  Yes, they bark.  My husband is a squirrel eater and he knows.
This commotion seemed to go on for a bit, but I couldn't see anything happening, until suddenly this large bird flew quietly through the trees, and out toward the house.  Now the chattering, barking squirrel was really upset, wherever he was.  I grabbed my camera and went outside (not through the sliders though - and why not?) and slowly went around to the back of the house.  There in the tree just a few feet into the woods was a big ol' owl looking down at me (at this point I remember hearing the owl call just about 10 minutes earlier).

The squirrel was barking at me now, too and I could see him on the tire of the old lawn tractor, hiding under the fender of the rear wheel.  I took a picture of him and then looked back to take one of the owl, but he was gone.  Just like that.  No noise, no commotion.  Just gone.

The squirrel stopped his barking.  I guess he was no longer mad at me.  He just stared at me from under his John Deere roof.  I went back inside and finished my chat.  The squirrel after a bit came out and raced up and down the closest tree three or four times.  On his last run up the tree he kept going.... hey, now I know why they call them routes and branches...well, roots and branches... they misspell root on the maps.