V is for Slow Village

A village of slow
slow people, slow mail,
Slow cars, slow children
slow days and slow sails.
The living is easy,
time slows to a crawl
And even the speech is
slowed down to a  d r a w l.

I lived there one time,
a long time ago;
And I can attest to
the time going slow;
But I moved away and
now time wooshes fast
How I wish to return to
that slow village past -

Where summers were long
and a week was a year;
And birthdays were spread out -
instead of too near.
A village of slow
of long, leisurely days
Is something for which
my heart and soul craves.

History/Background for this poem:

I was sitting in the parked car waiting for my husband to come out of the optometrist's office.  I was editing a few pictures I had taken for the A to Z, and watching two men getting a building all set up to redo the front where a new business was going in.  Two guys trying to fold/roll up a sign they'd taken off the building was a hoot to watch.  But that's another story.  There were many on that street as I sat there.  I should sit there more often.

So I was there waiting and working a little on my iPhone.  Then I said to self, "You should write one of the poems now, and then you would have another scheduled to go!"

To which I replied, "Yes, but I don't like to write on my phone.  I make too many mistakes and it gets too frustrating for a poem writing."

"Then find a piece of paper.  You have a pen in your purse."

So I began fumbling in the car door pocket beside me.  I felt a crinkly paper and pulled it out.  Ha!  A grocery store receipt!  And it's long.

Now I need a flat hard surface.  The only thing I could find was a box in that same door pocket - a box that still had two hand sanitizers in it.  So I turned it over to the flat back and began writing the above poem on the receipt.  Which came out in 5 minutes, with 7 quick edit spots. 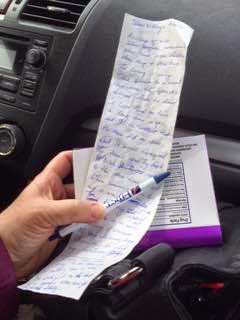 I had every intention of this being a cute, silly poem about calling the people in the village "slow"... but that is not what came out.  I apologize to all who would have liked it to be more upbeat and tongue-in-cheek.  I was fascinated at how quickly it took its place on the back of a receipt.

I was going to write another poem, but by then my husband had come out, and besides, the next piece I pulled out was only 2 inches long...my first thought?  A haiku would fit.

I told my husband about finding the receipt to write on, and when we got home, he went in his office and came back with a little moleskin notebook that would fit in my purse.  "Here, put this in your purse, then you will always have paper."  Isn't that sweet?

It's in my purse.  I don't know if anything can replace a scridge (this should be SCRAP) of paper though!

PS:  I just checked to find out if scridge had a 'c' or a 'k' in it and found that it is scridge, but that scridge is actually the rough edge on paper that has been torn out of a notebook, not a small piece of paper.  So this is totally misused by me, and has been for a while.  I am not too old to learn this, so I am changing my ways.  But I do so like that word.

PSS!:  I just figured out what I was really thinking of!  SMIDGE!  Or some would say a smidgen... Duh!  Hey, scrap + smidge = scridge.

Now don't forget to check out the Progressive Poem...we are nearing the end of the poem. Today is Tabatha Yeatts' turn, so head on over there in a few minutes and see what she has added to the mysterious mix.  What will happen next to our Delta Girl turned mermaid with the turquoise bracelet from her grandmother?  I'm getting antsy/nervous/excited/afraid about my line on Wednesday the 29th, so this afternoon, with my extra energy, I started drawing her, to get an idea in my head - something concrete.

Here's my rendition of our girl in draft.  I just wanted to try it out.  It's not really finished - parts are missing and some other stuff I'd still change - not all quite to my liking, but I just feel like I'm warming up to drawing.  It's relaxing to me and when something comes out the way I would like it to be, it is satisfying - like finding the right word in your writing.

Is it time for W yet?