February 12, 2014
These happy flowers will be out soon.  They are the first to spring up here, seemingly waiting under the snow for spring to arrive and melt the snow down to where you can see their sunny faces!  And if you would like to read more dandelion poems, head over to Poetry Jam, where Alan has links to other original dandelion poetry.  Check back throughout the week as more poems are added!
Find out more information about this flower, and other names it can go by in other countries here.
If you want to see how my husband and I learned to become responsible homeowners, you can go to The Lawn Less Mowed. There are dandelions involved. 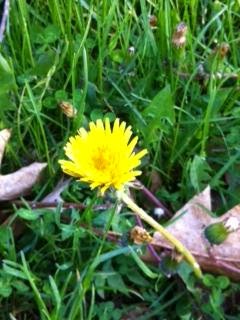 How to Know a Dandelion

Y is for Yellow

*The yadu (ya-du and yatu) is a Burmese form of poetry which consists of up to three stanzas of five lines. The first four lines of a stanza have four syllables each, but the fifth line can have 5, 7, 9 , or 11 syllables. A yadu should contain references to the seasons.
It has a climbing rhyme. The rhyme is on the fourth, third, and second syllables of both the first three lines and the last three lines.