The Circus Was in Town Sunday (and No One Told Me) 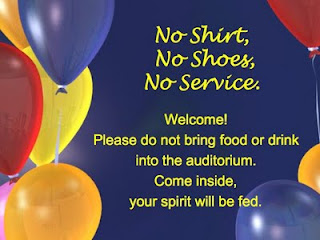 It seemed just another Sunday.
As we gathered in the back room though, we were missing five of our twelve choir members.  It was a bit unusual, but we'd manage.  We'd just have to reposition ourselves and sing louder!

We filed in to signal the start of the morning’s message service.  All appeared normal.  But as in a "what's wrong with this picture" page, the differences slowly became apparent.  A couple that was normally two rows from the back on the center aisle was sitting two pews from the front on the side aisle.  A mother and son who were usually in the back pew on the left, were one pew forward of their rightful seats.   It’s not like people own pews or anything, but it’s still somewhat disturbing when people are displaced.  You know that something is up with God.

We sang.  We finished.  Nothing else was different so far . . .
We filed down and slid into to our seats, and the message began.

“Now!” I guess God must have said.

A baby cried.  This baby is usually asleep all the time.
From behind me I heard the low voice of someone, talking to himself.  “Very strange,” I thought.

And then the others came in . . . first a woman juggling a doughnut, a milk, a purse and a can.  She came down the center aisle as the preacher spoke and sat in the very front pew.  Then two men, carrying tall, slurpy drinks with straws joined her.  Shortly after that another man, followed by a second woman came in with their jumbo drinks and settled in with the rest.  I tried not to watch them, but the activity of those five people caught my attention at various times throughout the message.  A slight attitude of irritation had grown within me at their seemingly blatant rudeness. They looked like they were ready to watch the circus, not worship or learn about God.

They ate and drank, and looked at each other and nodded.  At one point one man realized he didn’t have a Bible, so he got up and bobbed from pew to pew to find one.  Finally finding one, he quickly ducked back into his front row seat.  Soon his nose needed blowing, and the two women began rummaging around in their purses.  No tissues, I guess.  He got up and went up to the altar, passing the preacher on the way, to get a tissue from a box placed up on the altar’s edge.

The doughnut and milk finished, a can was pulled out.   “Snap, swish, fizz” the pull top was yanked open. One could only pray that it was a power drink.

The man’s nose required another tissue.  Why hadn’t he gotten two while he was up there?

At some point in all this I found my heart changing.  I listened to a small Voice inside of me, reassuring me that all was right.  Drinks continued to be slurped, purses poked and whispers whispered.  People were trying their best not to be distracted.  We were actually on our very best behavior.  I began to grin.  I remember the feeling of contentment and happiness starting to well up, and I knew God was doing a great work.  Shame on me.  I watched with a new attitude.

As the girlfriend was vying for the attention of her boyfriend to show him something in her wallet, I noticed that his eyes and attention kept going to the preacher.  He was looking past her.  He was listening past her.  The man who had gotten up for tissues and a Bible was finding passages as they were read aloud.  He was still slurping his giant green drink, but he was also caught up in the words that were being spoken.

At the end of each service, people may come up to join the church, ask to be baptized, pray on their own, or ask for prayer.  You may also ask for someone to show you how to be sure you are going to Heaven.

At that altar call three people joined the church . . .
and two men from that group had their names written down in Heaven.

The talker in the back pew came out of his Lotus position and went home.
The displaced will probably get their pews back next week.