Noah Has Landed - a New Home!

On Friday morning, after having our cat, Purrsee, put down, we went to Pet Quarters on our way to the Humane Society to just look at cats... maybe start the process of thinking about a cat... at least to stop thinking about what had just occurred.
As soon as we walked through the door, we headed to the left where they sometimes have a cage with rescue cats up for adoption.  We could see the cage, but before we got there to read the big "My Name is Noah" sign with a cat's history, we saw this rather large white cat with a gray skullcap lounging on a climbing tower.  I stopped to pat him.  Very friendly.  The same markings as two other cats we'd had in the long ago past.  "This must be the store mascot", I thought. "He's out loose and he is so beautiful and friendly.  I wish he was up for adoption."
We went over to the cage, but there was no cat inside.  I called over to the sales person at the register and asked (in a doubtful voice) if this white cat was Noah, to which she replied, "Yes, it is.  Don't be surprised if he is a bit shy."  But he wasn't.  He was purring and rubbing against my hand.
I asked my husband to pick him up (he was too high and looked like he might be too heavy for me at that angle), so he did.  The sales lady came over and warned that we shouldn't be offended if he wanted to get down.  He didn't usually like being held very long, especially by men.  But he was fine.  He enjoyed the attention again.
We just looked at each other.  What was happening?  Weren't we just looking and leaving? Then we went over to his sign to read up on this cat that was capturing our hearts - this cat who had seemed to pick us when we entered the store.
He was a stray who had tried numerous times to belong to families by hanging out at their house, only to be chased away.  He was finally brought to A Paw in the Door, a cat rescue, where he was brought in dirty, scrawny and with a sore paw.  They cleaned him up, had him checked by the vet, and then put him up for adoption.  He had been at Pet Quarters for a month with no one interested in him.  No one had looked at him, no one had filled out papers, no interest - until we came in.  I knew this was our next cat.  I filled out paperwork right there as he watched from his perch.  I did not know he was watching, but my husband was watching him watching me.
We sadly had to leave him there while the paperwork was checked and vet references were checked.  It would be 24 hours before we would know if we could pick him up.
I could not stay away though, and late in the day, before closing, we went again to Pet Quarters to say good night to him and to take a picture...or two, or three...okay, maybe more.
On Saturday morning we went out to breakfast with our son, and after breakfast my husband had to go somewhere, so my son and I took a trip to the pet supply store so I could show him the cat we were interested in adopting.  He liked Noah also.  When we entered the store there were 3 clerks in the front who all grinned and said "Hi!", and wanted to know if we'd heard from the rescue person, Joanne, yet.  I said I hadn't yet, we had just come in to say good morning to Noah.
We found him sacked out on bags of dog food in the back area, and he came out to play for a bit when enticed with a feather toy.  I decided to look around and see if there was a toy I could buy sometime later for him, and as I was browsing, my cell phone rang.  It was Joanne saying I could go to the store and pick up Noah.  I'd been approved to adopt this gorgeous guy.  I had to admit to her that I was already at the store to say good morning to him!
Joanne, the adoption consultant, then came to the store to bring me some vet paperwork. A sales person was called to let her know Noah was leaving in case she wanted to come in and say good-bye to Noah.  It was her day off, but she was attached to Noah and wanted to be able to say good-bye before he left.  I'm sure she will fall in love with another cat soon!  We did.
I loved Purrsee, and though at first it felt like it was a betrayal to fall in love with another cat so soon, I don't think it is.  I think it is testimony to the fact that we loved him enough to need another cat to fill the void left by him.
BTW  Our dog, Pippi, and Noah have already touched noses and have agreed that they will become fast friends.  I think Pippi's relieved that Noah doesn't seem to be a Ninja cat, like Purrsee was.  However, the ability to teleport does not seem to be beyond his capabilities.  He had a collar with a bell on it at Pet Quarters.  Now I know why.  He moves around so quietly, and finds the nicest places into which to tuck his not-that-small body.  He seems to just disappear at will.  He isn't really hiding in fright, just seems to be testing spots to see if they work out for him.  I may have to get him a bell, too.  At least for the first few days, so I can learn where his favorite spots are going to be. 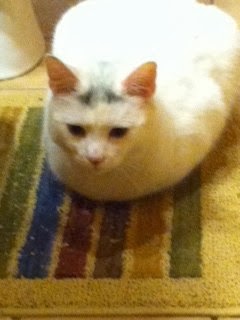 Look! He has his feet tucked contentedly underneath himself already!

Look!  He thinks he owns our bed!  When he comes untucked he gets pretty long.
Welcome, Noah!