Projects and Poetry and Friday, Oh, My!

It's Poetry Friday at Random Noodling with Diane Mayer.  Join everyone there in reading more wonderful poetry! 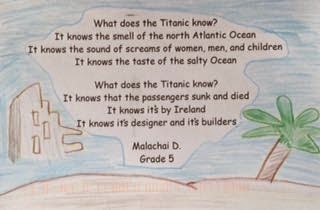 Jone MacCulloch at Check it Out had students write "what it knows" poems and put them on postcards to send out to other poets.  I received this wonderful poem about the Titanic and what it knows.  I love "it knows the taste of the salty ocean".  Thanks, Malachai, for this marvelously sensory rich poem.
My comment to Malachai on Jone's site:
"Today I received Malachai’s postcard poem about the Titanic! Thank you so much, Malachai. You had to do some research to do this one! I learned that the Titanic was built in Ireland. I didn’t know that! I thought it had been built in England.
I have actually been to Halifax, Nova Scotia, visiting the cemetery where many of the people who died on the Titanic are buried. And I’ve been to Newfoundland where there are memorials and remembrances of the lives lost in their area of icebergs. My grandparents were young children in Newfoundland when the Titanic sank off their coast.
Thank you for sending me your wonderful poem. It really meant a lot to me, and it reminded me of my grandparents and my trips to both Nova Scotia and Newfoundland."

The year the movie "Titanic" was released, it was just before Thanksgiving and I was doing a until on "The Mayflower".  My first graders were getting so confused about The Mayflower and the Titanic...they kept thinking that the Mayflower had sunk...
I ended up having to get pictures of each ship and having them list the differences between the two vessels so they could get them straightened out in their minds.  That was the only year students ever had difficulty with the Thanksgiving story!