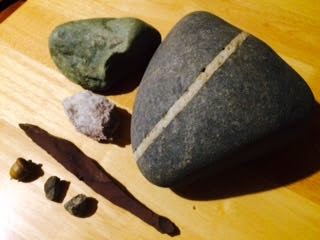 Today's Poetry Jam challenge is to write about pebbles.  I have lots I could write about pebbles.  I love them.  I don't have tons of them, but I do have a few favorites I have picked up over the years.  One of my oldest is my wedding rock.  My best friend gave me this rock for our wedding.  It is a rather large rock that has followed me around since 1972.  It has a line of quartz that runs through it - a ring - so it is considered a wishing rock.  Then I have rocks that I collected with my mother when we took her to Newfoundland on her last trip before she died - the one a doctor told her not to go on, and she got a second opinion on that!  They are sharp red rocks that shattered off the face of a cliff there.  I'm surprised we made it through security with them, they were that sharp!
Then I have shiny quartz and mica pieces and smooth white pebbles from Nova Scotia.  I try not to collect rocks anymore from beaches.  It doesn't seem right to deplete them, and could cause more erosion if everyone did it.  So I haven't gotten a beach rock in years.
I got a beautiful green rock from my daughter for my birthday one year.  Seems like it wasn't long ago, but I'm afraid it was probably 10 years ago... She was out walking with a friend and they came across this rock.  She knew I'd love it, and she brought it home and wrapped it up.  She was right, I loved it.  Her friend thought she was crazy - so I guess the friend must have thought I was, too!
My grandson brought me two rocks from the driveway.  I thanked him and set them on the table.  At church, I reached in for my Bible, and my hand touched something rough.  He had slipped the rocks into my church bag sometime before he left.
You can see all the rocks mentioned above, except for the white pebbles, in the picture - oh, and the acorn my grandson gave me, too, put there for size reference!

So, that's the history - my grandmother collected rocks, I collect rocks, my grandson collects rocks.  I have a picture of him on his way to Disney World this week, wearing his new sunglasses and holding up his treasure - a new pebble, stone or rock, whichever you like!

Though she collected rocks, you see,
She never read a book to me.

While walking on the beach
Or when she went on trips
She'd find a special rock
To slip in her pocket if it were small,
Stash in the trunk if it were large,
Or just carry it in her hand
Walking back home.
I'd see her carefully
place the rock
on her garden wall
Or in a special nook
Rock, pebble, stone
She never read a book.

She came from Newfoundland
I did not see her school pictures
In any photo book she had
No pictures of her classmates
As I had for my parents
and grandfather.
Had she gone to school?
Perhaps not
Or not for very long
Sometimes back then for girls
School were locked
Stone pebble rock
I only heard her talk.

Each piece she had
Told a story
Of who or where she was,
Places where she grew up
Places she had loved
Maybe they were her books.
Reminders of days
Of what she'd heard or seen
Rock stone pebble
A bit of where she'd been.

Though she collected rocks with me,
She never read a book, you see.