December 22, 2013
Well, last weekend we got a foot of snow on top of a foot of snow, and no one went anywhere.  It was even a bit much for our Golden.  Not really.  She loves snow.  She wants us to throw something so she has an excuse to dunk her head and look for it.  It's the closest thing to a pond she's ever been in.
Her face is not that white!  It's the snow from snowball diving.  She is not lying down in the snow here; she is standing waiting for me to throw her an icicle or snowball!

And today there is more stormy weather.  It has been warm enough that the precipitation has been misty rain, which freezes when it hits the ground.  We tried going in town but we turned around and came home.  It looked like wet roads up until you tried to stop.  There was no stopping.  So rather than have a Christmas in the hospital, we opted to stay home for the day.

The temperature is dropping and the pine needles are drooping under the weight of the ice.  It is going to be a long night with the possibility of power outages due to downed branches and wires.  The weather channel says it will be over at around noon tomorrow.

I wrapped presents.  My husband built a nice wood fire. Now I'm making homemade chicken pot pie and a mini apple pie (because I have an apple and extra crust - actually I added unsweetened natural applesauce, too, to fill it up more!).  It was a good day for staying inside. 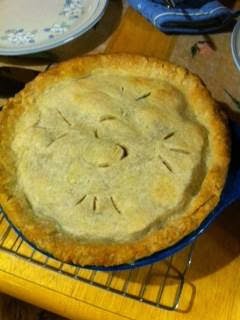 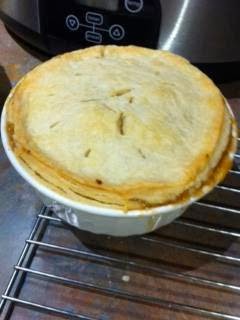 And they tasted just wonderful.  Now for some tea.  I should have had that with my pie, but we were too hungry-excited to wait. 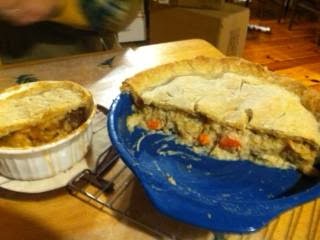