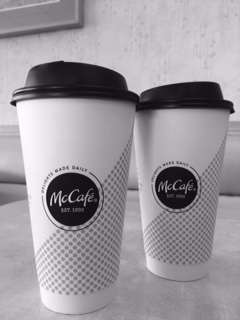 Fourth day with no power.  Still have to be careful of trees resting on wires, closed roads, etc.
I am so sorry for making this long, but I started writing it when I found out the topic, and it so nicely coincided with the storm, and all the things that happened that, though on the surface seemed difficulties, were actually blessings and true reasons for deep gratitude.

Colossians 3:15 - And let the peace of God rule in your hearts, to the which also ye are called in one body; and be ye thankful.

~~~~~~~~~~~~~~~~~~~~~~~~~~~
This should be an easy one.  On the first Thursday of each month Irene Latham has arranged for us to post and be hosted about a topic selected by the host of the day.
Today's hostess is Karen and our topic is Gratitude, the roundup is Here on Irene's site.

This week has been full of reasons to be grateful, to have a heart filled with gratitude.  We started off the week, on Sunday, at church, where people were talking about preparing for the storm.  "What storm?"  I had no idea there was a storm coming.  That is mostly because we don't get much in the way of news or weather now.  We mostly watch Netflix.  There's not fast Internet where we live and we don't get cable.  We had a dish, but there are so many trees and leaves, it wasn't reliable.  So basically we don't get TV, and news is only if we remember to look online.

When we got home, we took all items off our porch and tucked the Weber grill in the garage, where it was time for it to go anyway.  Then we waited.  Our generator was on the porch ready, and I asked my husband if it still worked.  He assured me it did and it had gas in it.  We'd used it last winter.  No, we hadn't.  But okay.  It works. 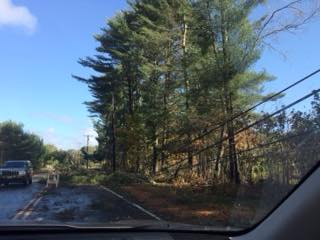 And it has remained dead.  Four days and counting.

When it was real morning, my husband got up and started the generator...not.  It was dead.  It had gasoline, it started, but it wouldn't continue running.  Hmmm.  Not so grateful about that... but not to worry.  Let's just focus on what we CAN do. 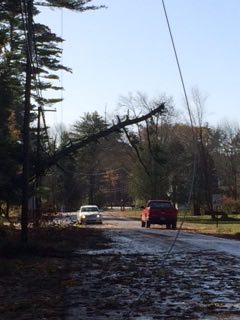 We waited for a few hours before venturing out to see if there was power anywhere else. The dog ran out in the rain, then we wiped her feet and back and fed her.  She was so wiggly grateful!  It would be nice to have coffee and breakfast.  I'd be wiggly grateful, too!

We left the house unprepared for the massive outages, powerlines down and trees crossing the roads.  Our one McDonald's in the area was on generator power, and was open!  Its usually colorful screens were displaying the LG emblem on a black background... and it was packed.  Surrounding towns had discovered our little haven of hashbrowns. 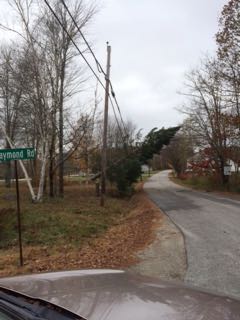 Though it was shoulder to shoulder packed with people waiting for food, everyone was in good spirits.  We thought our son was coming to join us, so we ordered two extra sandwiches.  But he was already trying to weave his way through wires and trees to make it to work, so didn't show.  We gave our sandwiches away, to someone waiting.  How fun it that?  I was thankful to be able to do that.  The recipient was thankful to have them.

Then we began our search for a generator.   We gradually headed inland and north a ways where the storm didn't seem as devastating. Still there were none to be had; others had already been there before us. 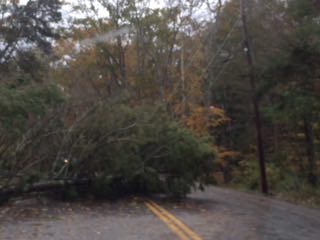 Oh the second morning, I happened to text my brother to see how he'd fared and let him know that we had no power and our generator had chosen this time to stop working.  We live on an island with basically one main road that ends literally on a dock into the ocean (and yes, people have driven off the end accidentally in the fog), so when they are looking to restore power, we are not top on the list, since heading our way is a dead end - not on the way to another town until you hit London. 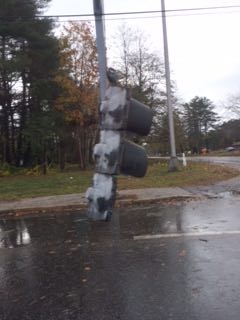 Anyway, he had a generator he was getting rid of!  I should have texted him the day before!  But if I had, I wouldn't have seen my sister at a McDonald's and had a nice breakfast chat with her.  We are only about 45 minutes away from each other, but don't see each other as much as we should.  On our way to get the generator (about an hour south of us), my sister came in one side door, as we came in the opposite side, and we met at the counter.   We both grinned in surprise!  This was neither of our local McD's, and neither of us frequented this one.  So it was a chance meeting, and I was grateful for the opportunity to touch base with her.  She had no power either, and was out in search of food, as we were. 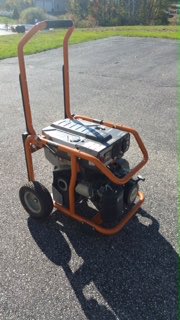 Then we discovered that the connector we had on the house was an OLD four prong one, and this generator was the newer style four pong.  We could, however, still use an extension cord and directly connect our refrigerator to the generator through our kitchen window.  Sweet!  Our food was all spoiled, BUT we could accommodate our son's freezer full of meat after emptying ours!  I was grateful we could save what he had.  It was a LOT of frozen meat.

The search for an adapter continued.

On Wednesday morning I had an idea - maybe our contractor would have some idea of an out of the way place that would sell generator supplies.  He came up with a local and lesser known place than Lowe's or HD to check. We scurried off to see if they had the part!  But when we got there we were told that the last one had just been sold.  We sat in the parking lot looking on our phones for another option.  Suddenly we had a knock on the window and were asked to come back in the supply store, they'd just found one.  Someone who worked there had evidently set one aside for himself to purchase.  I am so grateful to him.  I hope he has a working generator or power - he probably does, but wanted to make sure he was ready for the next storm. What a blessing!

So much to be thankful for - we got a generator just in time to save all the frozen meat my son had in his freezer, in spite of all odds.  We got a part we needed when it looked pretty bleak.  We were able to keep warm, find gas, find food, talk to strangers as friends.

Being without power does not mean we are powerless.  In some ways it gives us more power than we knew we had.  We call on reserves we had forgotten existed.  We call on friends.  We depend on others.  They call on us.

Again, I'm sorry this is so long.
Oh, I forgot.  I'm thankful that we bought some remote controlled LED puck lights to try under the cabinet lighting a few days before the storm.  Boy, did they come in handy, and you can carry them to any room for light!  Simple blessings, little things that still give me a grateful heart. 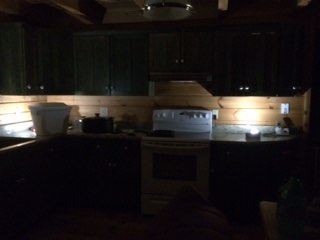 Philippians 4:11 - Not that I speak in respect of want: for I have learned, in whatsoever state I am, therewith to be content.