August 11, 2017
I have been busy with grandchildren this week.  They are leaving just after lunch, so the legos, stuffed animals, crayons and gluten foods are all being put away until the next visit!
I have been writing some when I get the chance - mostly early morning or during nap time.
I wanted to share one of the days:

We went to the playground behind our local school where the kids climbed, swung, slid and ran, and ran, and ran.  And then they discovered a little house on a pole.  It was a Little Free Library.  I explained to them what that was, and how they could each pick a book and we'd put two back on our next visit.
My grandson, soon to be six, picked Chris VanDusen's "If I Built a Car" to take home.  It is an awesome book, written and illustrated by VanDusen, and the rhyming is just the way I like it!  And just right for my grandchildren, too!  Yay!
By request, his mom read it that night before bed.  The next day he had determined that he would design some cars himself.  He asked me if I had some paper he could use, and we rustled up some printer paper and some pencils and pens.
He began working, and continued during quiet time/naptime in his room, just like in the pictures in the book.  He emerged at the end of nap with more images to post on the refrigerator.
He wanted to build one now.  His mom asked if he was going to build a prototype and explained what a prototype was.  Yes, he would build some prototypes.
He set up a shop on the coffee table in the living room, with two Lego boxes and one of his drawings.  The first thing he built was the hot dog car - as seen in the book (the red and yellow car).  Many more cars followed.  It is a good thing that years earlier my son was really into Legos - and that I'd kept them all!  My grandson needed lots of blocks and wheels!  Oh, and doors! 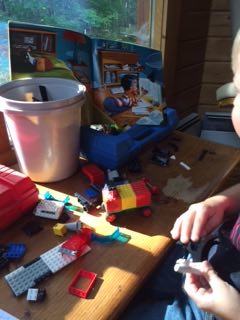 My story/poem ... inspired by my grandson, the book "If I Built a Car" and the book "If You Give a Mouse a Cookie":

If you give a boy a book
He will want to read it.
Reading it will give him ideas.
When he gets an idea,
he will need a pencil.
And if he asks for a pencil,
he will also need some paper!
When he gets his paper,
he will lie down on his belly to draw...
He will ask for a blanket!
The blanket will be cozy and
he will think about taking
a nap.
When he thinks about taking a nap,
He will turn off the light.
That will make it too dark so see his paper,
and will ask for a flashlight.
His flashlight will remind him of
headlights!
Headlights will remind him of
cars, and
He loves cars!
He will start to draw a car with his pencil.
When he finishes drawing the headlights,
he will realize that
cars need tail lights, too.
He will need crayons to make them red.
He will ask for some crayons.
When he gets crayons,
he will begin to color the car,
And draw lots more cars.
And pretty soon
he will have LOTS of pictures
on LOTS of papers.
He will ask for a stapler
to make a book.
And if a boy has a book
He will want to read it!

by Donna JT Smith (aka Nannie)


Poetry Friday, it is!  Follow me!  I'm going to visit Margaret at Reflections on the Teche!  She's hostess for her birthday party today serving up delicious poetry.