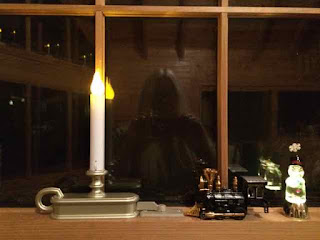 Silver Birch Express now has my poem "Christmas Storm" published on their site.  You can find it here.  It is a Christmas Eve poem, inspired by a trip back to Maine via Amtrak on Christmas in 1983.

As a young couple, we lived in Minnesota for a while, so had to make trips to Maine after our children were born to see grandparents in Maine. After our train trip at Christmas in 1983, we decided to move back East to make the trips less eventful. This was the longest trip ever with two little kids (an eight-month-old and a three-year-old old) on a train iced to a halt a few times and going in reverse at others. Had to inch along because frozen tracks can crack and it was frightfully cold out — well below zero. Bathrooms stopped working having frozen up. All trains were cancelled when we got to Chicago, so we ended up between homes not knowing when we would be continuing on the journey. But we had the best time in Union Station on Christmas Eve sharing Christmas cookies with strangers and listening as a man waiting for a train pulled out his French horn and played Christmas carols for hundreds of tired passengers. Instead of arriving the day before Christmas, we got there the day after! Thirty-six hours late. I can’t think of a better Christmas than that one, though.

I hope you enjoy it!  And, if it is in your plans to celebrate the birth of Christ... have a Merry Christmas!
Well, and if it isn't... Merry Christmas, anyway!