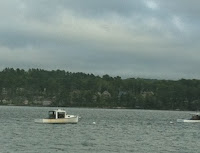 And here's one more part  It could have been the last, the end, that's all.  But I have started part 4, and have thoughts about part 5.  I will not be posting those.  And after a few days I will be taking these parts down.  I can't have part of "The Book" up here.  It may be time to just work on it while I post "other stuff".
Read these in order if you came here by chance.  Here are the links: Part 1, Part 2.  Let me know what you think.  Really.  Pretend you are an editor, or a reader (which shouldn't be too hard to do, given that you are reading this).  I will not be hurt so much that I can't recover, but I may be nudged just enough to become a better writer.

The morning those yellow and white silent guards were freed from their watery posts above the traps, was the best morning ever.  The ocean was sparkling as we thumped across the bay.   The haul was lighter than most days, but in a day or so, when the bait in the abandoned traps was gone, things would get back to normal.

For a while those shells of traps would be picking up some stupid lobsters; the ones that didn’t know any better than to wander into a kitchen with no food.  But, like a “timed release” cold capsule, the hinges on the traps’ escape panels would dissolve, and the traps would never steal another lobster from my grandfather.

For now, Gramp was pleased. The Cammy May would not be trolling these waters.  Gramp’s fields were his alone again.  Macy would think twice about plopping traps down in another man’s waters now.  Or one would hope.

I’m pretty sure in years to come it will still be a mystery as to who cut the lines to Macy’s traps.  I’m sure Gramp thought it was Garrison, next door.  Garrison would have seen Macy’s buoys as he made his way out past my grandfather’s to his own.  It wasn’t like Garrison hadn’t taken matters into his own hands before. You just don’t mess with people’s livelihoods here without consequences.  Sometimes it was worse than cut lines.  I’d heard of boats getting all stove up and other “accidents” along the coast where lobstermen were feuding.

Garrison and Gramp were good neighbors to each other.  Not friendly friends, like “payin’ a visit and having a cup of tea” friends; just good neighbors who would give you the shirt off their back...or cut someone’s trap lines if they were in your way.

I’m pretty sure Garrison, must have had his own ideas as to who cut the lines.  He probably thought it was Gramp himself.  But they weren’t about to ask.  It wasn’t a thing people talked about or bragged on.  It was just settled quietly, no questions, and you just went on doing what you do.

The Marine Patrol called Gramp when Macy reported his lines cut, and the matter was looked into for a couple of days - well, more like minutes. and was set aside.  It was just one of those things that happened when you didn’t play by the unwritten rules of the sea.

Most likely no one’ll ever know who cut the lines that night.  Did I say night?  Hey, it could’ve been morning.

I’m older than they think; I’m not stupid. I know the rules.  All’s fair in love and lobster wars.

I smiled to see Gramp in the dooryard painting the greens on some new buoys, humming up a storm.  I scrambled to find another paintbrush, then stood shoulder to shoulder with him, adding my low whistle to his tune.