July 21, 2017
Poetry Friday, yippee! This week's hostess is Katie at The Logonauts.

Today is a Rhino-Whine...inspired when I saw Mary Lee Hahn's post about her stuffed rhino and the book Rhino in the House, the true story of saving Samia by Daniel Kirk.  Now I might have to read Rhinos Don't Eat Pancakes by Anna Kemp, which I discovered when I looked at the Samia book on Amazon.  Reading...writing...learning... it's just a never-ending cycle!

I ordered, on Amazon, the Shel Silverstein book Who Wants a Cheap Rhinoceros, and bought a stuffed rhino for my grandson when he was here last week. 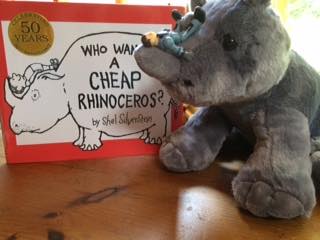 BTW: This figure was one I found on the beach between rocks.  He'd been abandoned between a rock and a hard place, so I picked him up off the deserted beach and took him home. 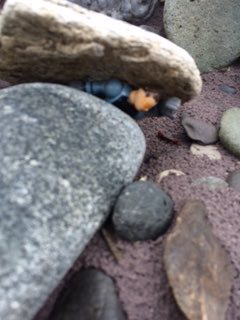 My grandson, who is now 5 11/12, loves the rescued man, the book and the stuffed animal. It was his idea to recline the man on the rhino's snout (look back at the book and rhino picture), copying the picture on the book cover.   I haven't read him the poem yet.   When they visit in August, I will read it to him.  Hope he brings the rhino for a visit!

I want a rhino, big and fine;
A rhino that I call all mine!
I’d love her dainty rhinocertoes,
Her very pointy rhinocernose;
Rhino fine,
Rhino mine,
My love is rhino-genuine!

In my bathtub let her brine,
Brush her till she starts to shine!
When we’re finished doing that,
She could don my big sunhat;
Rhino fine,
Rhino mine,
In our deck chairs we’d recline.

Supine in the warm sunshine
Could it be it’s time to dine?
Browsing grass and leaves at brunch
Downing berry pies for lunch
Rhino fine,
Rhino mine,
Gives no thought to her waistline!

I’m in the “Buy a Rhino” line!
I’ll take sweet rhino number nine!
I want that huge rhinoceros,
No matter what the cost to us!
Rhino fine,
Rhino mine,
Remove her “Rhino For Sale” sign!

No longer will I sigh or pine;
No need for her to rhino-whine
This rhino’s coming home with me
For cookies, honey and some tea;
Rhino fine,
Rhino mine,
My world is now rhino-divine!

This distant cousin of equine
That some say looks like Frankenstein
Proves beauty's in beholder’s eye,
I think she's quite a cutie pie!
Rhino fine,
Rhino mine,
Perhaps I’ll name her Valentine!