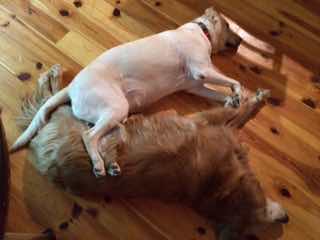 It's Poetry Friday.  Heidi Mordehorst at My Juicy Little Universe is our Poetess for the week!  Thanks, Heidi!

It is late in the day for me to post.
I'm sick today and everyone is lying low - even the dogs.  Thank you dogs for sleeping.  However, earlier, Ginger (the young lab) stole a towel I'd used on them for drying off coming in from the rain.  Then she sneaked in the bedroom and stole one of my shoes.  She knew I wasn't feeling well, and wanted to cheer me up with a little game of "see if you can get what I shouldn't have".  I won but I was dizzy and had to rest after scolding her.  She just grinned at me.
Last night she knew I didn't feel well either.  She got in my lap...or maybe that should be - she covered me up on the chair.  She hasn't tried to be in my lap since she was 20 pounds...she's somewhere over 70 now.
Oh, crud.  The cat just came in the room meowing plaintively to get the Lab riled and interested in some cat game.  I don't think it is all the dogs' faults on Planet Cat'n'Dog when a cat gets chased by one of them.  At least one cat I can think of knows just what he's doing when he struts through a room.

Anyway.  I am going to see if my fuddled, muddled brain has a poem or refrain, or if it's too much of a strain to keep a thought on train.  There.  A poem has been slain without a bloody stain...though my nose still drips like rain and my powers seem to wane - I feel I'm swirling down the drain. That wasn't too much pain...this poetry from Maine...though maybe it's inane, and certain to draw disdain when read with unmuddled brain.

if my befuddled, muddled brain
has a poem or refrain,
or if it's too much of a strain
to keep a thought on its train.
There.
A poem has been slain -
though lacking bloody stain -
my nose still drips like rain
and my powers seem to wane -
as I'm swirling down the drain.
But that wasn't too much pain...
this poem sent from Maine...
though maybe it's inane,
and sure to draw disdain
and thoughts that I'm insane,
when read with unmuddled brain.

Rewritten with edits, revisions.  Sorry.  I'll be better by next Friday, I'm sure.  The following poem was what I'd set out to try.  I got distracted by the muddling, puddling, befuddling of my brain. 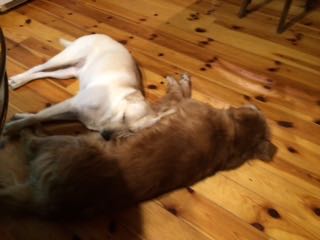 When I got up, she decided to see if I was serious about not caring if she were in the chair...
so very quietly...