February 13, 2017
Well, there's no going out today.  The blizzard started yesterday afternoon and has gone through the night.  The winds aren't as bad yet as I thought they'd be.  It is gusty, but snow is able to cling to branches and bird feeders still.
The snow is over the dog's back where it is fresh, and where it is deeper from the last storm, she has to keep her nose up pretty high!  Fortunately we have a canvas Frisbee for her to fetch, but even that gets buried in the snow and is hard to find. 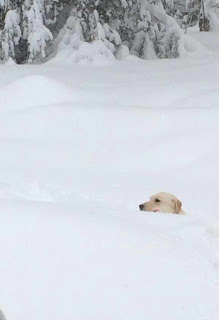 It is still snowing and will be continuing today into the afternoon sometime.  Then it says the winds will pick up.  It's hard to tell then whether it is snowing or not and the snow will be redistributed making drifts in spots perhaps already shoveled once or twice.
It's a good day for soup and a few movies, coffee and a book, tea and a crumpet or two.  I'm substituting jello for the crumpet...but I'll be doing everything else.

My poem for today: 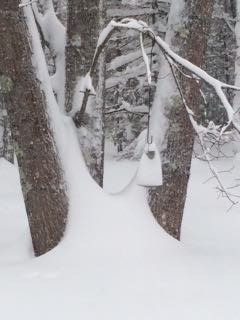 The drive thru is closed
Don't even try it
Don't even come out
And take a fly by it
It's filled up with snow
Right up to the brim
There's no seeds inside
The pickings are slim
If you had been smart
You would have flown south
Where there's plenty of food
To stuff in your mouth.
Instead you are here
Where everything's white
And nothing to eat
Not one little bite
Come back tomorrow
Try us again
I'll put in more seeds
We'll be open at ten.