A Slice of Layer Tuesday

October 27, 2015
It's Slice of Life Tuesday!  Go read for yourself what others are slicing about over at Two Writing Teachers.

Let me start the first layer with my grandson's amazing drawing today.  Such perspective and range of emotions...even with one eye.  (We'll talk about my "one eye" issue later on in the post!)

The family:  Two adults, two children.
Adults have two eyes.  Kids have one.  And a large nose.
Dad is the tall one.  Mom is lying down.  She must be tired.

And now we can go on to the other layers of the slice.

On Sunday, I was at my brother's house, and my sister, and other brother and his wife came over to help me celebrate.  We had gluten free cake!  Bette Crocker makes a mix now for us antiglutenarians.  And it was delicious!

I received some art supplies for my new hobby/blood pressure lowerer/comedic relief/entertainment for others/frustration for the dog.  It is so many things to so many people and animals.
My husband got me this nice set to remind me of where it all started... my grandson's paint set I bought him to use when he visits.  He's so sweet!

And my brother and sister-in-law got me some more supplies, including a set of drawing pencils and a pad of drawing paper.  I have always enjoyed doodling while I'm dawdling, but not much more than some squiggly lines (though I did draw some horses once that I thought came out pretty good just using #2 pencils.  I didn't know they came in a range of leads! 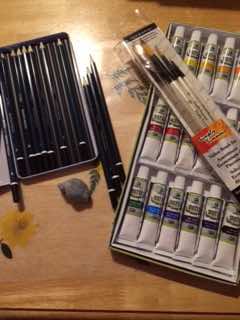 And so I embarked on my first apple in a long time.  I made it in the lower left hand corner of the page.  I didn't like it.
Then I decided to draw an eye. 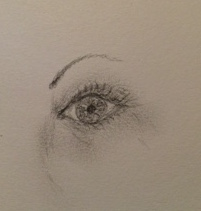 It was okay.  But it needed more.  So I added an eyebrow and a bit of nose. 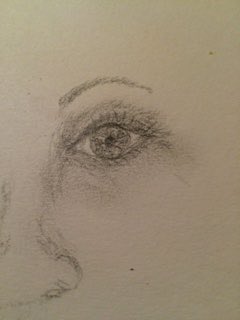 Ok.  Brave?  Do the other half of the nose and add a mouth....
Now, I know what all you artists out there are thinking...
What is the world is she doing?  People "don't supposed to be" drawing this way.  Where'd the lines go to make sure everything is on the right plane and angle?
My answer:  There are no lines.  This is the way I do life.  It is never pretty. 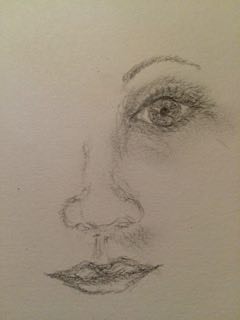 So I added her mouth and the other side of her nose. 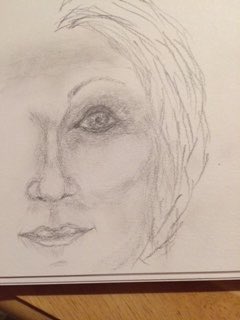 Her iris was sticking out of her eye some, so I retouched that and added more shading and some hair.  The unfortunate thing for her was that I had made that apple first, and she was sitting right beside it.  I tried erasing it.  My son had said "good luck on making a second eye" - they are hard to get to come out the same.  My excuse for not making another eye - the other half of her face was...NO ROOM!  I have an apple there.

But then this morning, I decided to try to erase the apple, knowing full well it was not going to be completely "out of the picture".  I was right.  But I decided to carry on anyway right through the remains of the apple. 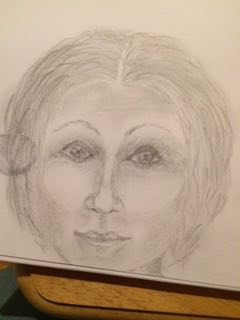 She is not "all that".  But she is a start.  You will notice that she cannot be totally finished.  She is right on the edge.  I sent the picture to my son.  He said she had a tumor.  I told him I was thinking of giving her a big bow in her hair, or a hat, or maybe a little mouse friend...
I know she is not the best art anyone has ever done.  And as I look at it I see where this or that area could have been nudged in a slightly different angle or shading could have been changed.  But it isn't the worst.  I know that because I have done worse myself already.  But I'm trying to be more positive with myself.  I need to stop talking negatively and be encouraging, as I would be to any other friend.
Aren't we bullies when it comes to self-talk?  I'm going to go put myself in time out!  Look back at what I wrote - "She is not 'all that'.  But she is a start."  Would you even SAY that to a friend?  And I thought I was being kind to myself.
Hey, Donna!  What a great drawing!  I like how you made her hair!
Ok, now I get a treat for talking nicely...as soon as I get out of time out.

One last layer.... of quilts...
Saturday night I put our puffy quilt back on the bed to delay turning the heat on in the bedroom - oh, so cozy to slip off to sleep on these nippy fall evenings!

Added bonus - the winter quilts are heavy enough that the cat's claws don't go through when he attacks my feet!  Maybe I'll try a sketch of him next.  He's easy to catch sleeping in one spot long enough, I think.  Eyes will be closed - that should be easy as long as I start in the middle of the paper.