July 10, 2014
So what do you think goes in the blank?  Where do you stand on the Lone Ranger's departing shot on his trusty horse, Silver?

I cannot believe that I believed for my whole life that the Lone Ranger was saying something he wasn't saying!
This all started with a picture of a horse's glittery hooves on Laura Purdie Salas' website for her 15 Words or Less poetry challenge.  I commented on another commenter and wrote "Hi-ho, Silver!  Away!" after checking to make sure the "Hi" was really "Hi" and not "Heigh" or "High".

During my spelling research, I found that some people thought The Lone Ranger actually said "Hi-yo, Silver..."  Now that was just ridiculous!  No one said "yo" in the 40's and 50's!  I was positive it was "Hi-ho", as were many others on the Internet.  But now I was intrigued.  How could you tell what had really been said?  Probably not by watching an old show, but maybe...perhaps I'd heard it wrong so many times, so long ago.  Could I trust my ears to hear it correctly?  It seemed I might not.  I needed to see it written.

So I went looking for a script for an old radio or tv show.  I happened upon Generic Radio Workshop Scripts.  In it they used "Hi-ho"!  Yea!  Score!   That must be it.  I was right!

But then I found a site that had old comic book files scanned in, Our Media.  I thought this would confirm my thoughts and the scripts.  But no.  I downloaded a copy of The Lone Ranger comic book from 1949 and tried to open it.  Gibberish.  It was a .cbr file.  I went online and found that cbr stands for Comic Book Reader.  So I looked for something that would read that type of a file...oh, yeah, on a Mac not a PC.  Found one finally, through CNET - Simple Comic for Mac.  Yes!  It was free and it was a quick download.  The file opened easily.  And there on my screen was an old copy of a Lone Ranger comic book!  I flipped through the pages.  This was so slick!

And then, there it was: 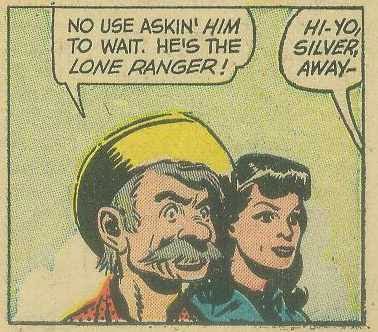 Do I need more proof than this?
HI-YO, SILVER, AWAY- ?  Not even an exclamation point.
Nooooooo!

The script at Generic Radio Workshops must have been transcribed by someone who "knew what he said", as I had.  I've contacted them (to see if that was the case, as I'm sure it was).

I am in the process of deconstructing and reconstructing my childhood memories today.  I'll be looking for some old videos and trying to reconcile these conflicting audios that are playing in my head.

Listen closely.  It is at the end of the show around 1:22:34, in case you aren't in the mood to watch the whole show.  I wasn't yet.  I'll watch it later, after I've reconciled my memory and the actuality.

Right now I'm feeling a little betrayed, misled, and annoyed - and yet somehow, enlightened and educated, ready for Jeopardy. "What is HI-YO, SILVER, AWAY"?

I feel like I did when I realized that the words to Winter Wonderland were not "Later on we'll perspire, as we dream by the fire".  I still think "perspire" makes more sense than "conspire" though.  Does anyone else?