September 10, 2013
(This has taken me FOREVER to write.  I'm still juggling glasses for reading and light.  No one pair works for everything.  BUT my sight in my cataractless eye is coming along just wonderfully.  So if anything is written wrong, let me know.  I just can't go through and try to reread it. Time to go do eyedrops again. The links are just in case you are interested in some of the spots to which I've referred.)

We often have the best times when our timing is all wrong.

For our anniversary yesterday, we had decided to take the train from Brunswick to Rockland, enjoying the ride in the old time cars, and then walking to The Brass Compass for the Lobster King Club sandwich (which is to die for good and probably one of the best kept secrets of lobster sandwichdom in Maine).

We were late getting out of the house, but would make it in time for the 10:00 departure, however my husband discovered that he had no handkerchief, nor tissues, and his nose was running like a faucet due to some newly blossomed weed evidently.  So we had to stop at Reny's and grab a new batch of handkerchiefs and some tissues for good measure.  And decided to take the train from Bath instead, as it left there at 10:25 and we were right there, early now.
We went inside the train station that sits by the bridge over the Kennebec River and next to the Bath Iron Works, wandering around and waiting.  A few other people came in, picked up brochures from the Visitor Information Center there, and left.  I finally went up to the counter to check to make sure we could buy tickets on board.  The kind, but not from Maine, volunteer spoke with a foreign accent as she told me "Oh, no.  There are no trains on Mondays."

How did I miss that?  Oh, maybe because I am fumbling with sunglasses, bifocals, print size on my iPhone and two disparate eyes - that's how.

Okay, so our anniversary trip has suddenly been cancelled.  What to do?  Go with the flow.  Improvise.  Make it up as you go.  Do something else completely.  Wing it.
So we wung it.  We just started driving, looking and thinking, and making it up as we went.

On Sunday I heard of a nice lobster place in Sanford, but what was its name?  I had to text someone to find out.  Yeah, Shain's - ooh, Shain's also makes ice cream.  It's about an hour or so away.  So off we went to Shain's of Maine, for a $5.99 lobster roll, the way it should be - not too expensive.  I had a Shain's Root Beer with it.  Even the sodas were only $1. 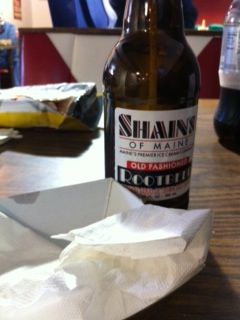 I tried to take a picture, but I ate it before I could snap one. I didn't even remember to take a picture of the chocolate chip cookie ice cream sandwich for dessert. They were both very good.

Then we continued our drive, south to Kennebunkport and looked at the ocean as we drove by.  We couldn't stop, though there was plenty of parking.  As a non-resident, we needed a $15 parking pass for the day from the town office.  It isn't free until September 15.  It was a beautiful drive though.

We almost stopped at the grocery store and picked up steaks to take home, but before we could do that we changed our minds again and headed farther north and inland...all the way to Farmington.  We stopped on the way for some crackers and soda and iced tea to tide us over.

Before we had finished our drinks, we discovered a wonderful lake with benches right up to the water's edge where we could sit and sip our - whoa there's the yearling doe by my window, munching on leaves and grass - 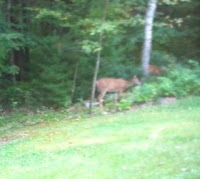 anyway -yes, sip our drinks and relax, watching the water and boats being launched into the lake for fishing excursions.  It was a great, relaxing time as the sun was going down.

Wow.  It just doesn't get any better than this. 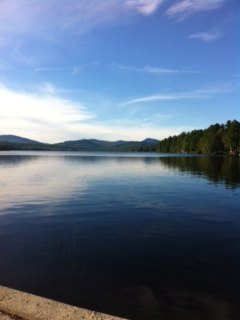 We finished our drinks and got back in the car, heading into the college town for some real food.  I really wanted to find a place with some atmosphere; not a college hangout, but we'd take what we could find.  As we drove through the town, I spied a "storefront" restaurant that looked like it had candles on the tables.  So we went around the block once to find a spot to park and go in.

It was just what I was looking for, even though it looked as if it had been a Woolworth's in it's former life.  It was quiet, with subdued lighting, candles, and a nice menu.  Just before our meals came, a woman began playing medleys of relaxing music on a baby grand piano.  Wow.  What an awesome surprise!

We had been talking about what movie we might like to watch when we got home and couldn't come up with any ideas, so I texted my daughter who is a library of obscure but great movies.  She gave us some ideas.  And then I got a text from her saying before you get a movie, check your email.  So I checked my email.
Wow, again.
She had sent us a gift card from iTunes to buy or rent movies - our anniversary gift.
Nothing had gone as planned today.

We ran out of time to see a movie last night.  But next Saturday we are taking the train to Rockland, and getting a lobster roll or club sandwich at The Brass Compass.  And then we will come home and watch a movie.

I wonder what will REALLY happen...